Is the brain hardwired for religion? 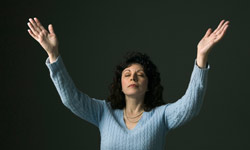 It can't hurt, but does it help?
Robin Bartholick/UpperCut Images/Getty Images

­Religion and science are like oil and water -- destined never to mix well. But a field called neurotheology is beginning to examine the area where these two belief systems meet: in the brain.

A scientist named Michael Persinger has taken a novel approach to experimenting with how the brain and religion interact by inventing the "God Helmet," headgear with electrodes designed to create a religious experience. The electrodes send pulses through the brain, disrupting activity in the temporal lobes to create the feeling of a presence. The big idea? If we know that the brain is involved in religious experience, we should be able to manipulate the brain to create the feeling of God being present.

Andrew Newberg of the University of Pennsylvania set his investigative sights on the brains of Tibetan monks, using brain imaging to document changes as they meditated. Among other things, he found that activity in the parietal lobe decreased. This part of the brain helps you determine where other objects are in relation to yourself. So when the parietal lobes of these monks began to quiet down, they could no longer sense the boundaries between themselves and everything else; in other words, they achieved a feeling of transcendence. Newberg had the same findings with a group of nuns, proving that at least during a religious activity such as praying, the brain is in on the action.

Learn more about the intersection of God and gray cells in Is the brain hardwired for religion?