When we lose weight, where does the lost weight go? 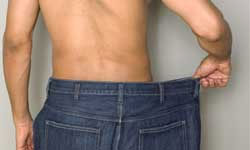 When you lose weight, where does it go? Not in his pockets.
Image Source/Getty Images

­Low-fat, low-cal, no-carb, sugar-free: the passwords to the world of weight loss. Some people diet for health reasons, while others just want to be able to fit into their skinny jeans again. The pound-dissolving regimen begins with a careful grocery list and a fitness plan, but where does it end?

We get energy from food. Your body breaks it down and then chooses whether to use it for energy or store it in fat tissues. To lose weight, you have to burn more energy than you take in. But where does that lost weight go?

The fat in your body doesn't disappear. Think of the process as the water cycle: The rain comes down and collects in a lake, where it evaporates and returns to the air, only to end up in clouds and fall back down to Earth. The same thing happens with fat. When you burn fat, fat cells end up releasing molecules called triglycerides that eventually break down into glycerol and fatty acids. They end up being used for energy, and the byproducts of that process are things like water and carbon dioxide, which come out of us in the form of sweat and exhalation.

Find out the whole story in When we lose weight, where does the lost weight go?