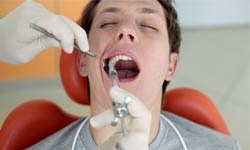 Open wide, kiddo. Let's see what you got.
Stock4B/Getty Images

­Standing next to Cro-Magnon man, you'd probably feel pretty good about the course evolution has taken, looks-wise. But he didn't have to worry about his wisdom teeth getting impacted, and you do.

Wisdom teeth, or third molars, show up when you're in your late teens or early twenties, and they have a bad habit of coming in wrong and screwing up your mouth. This is why most people end up getting them surgically removed and spend a week eating Jell-O.

About 100 million years ago, your mouth had plenty of room for those teeth because they were needed for tearing apart and eating prey. As humans evolved, jaws shortened, crowding out those third molars.

Try Are people without wisdom teeth more highly evolved? for the whole enchilada.