How can a heart power its own pacemaker? 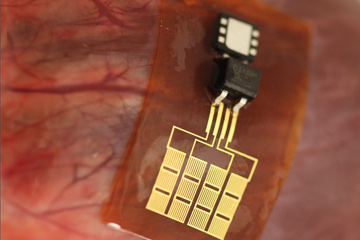 The pacemaker -- that implantable device that prods the heart with electrical pulses, prompting a ticker to beat regularly -- was an accidental invention. Wilson Greatbatch (whose name is a great invention in itself) was a medical researcher and inventor who was trying to capture heart sounds when he stumbled onto a way for his device to give off electronic pulses [source: Feder].

This was a big deal in the world of medicine. Before the implanted technology, pacemakers were hooked to bulky external devices that literally shocked patients. Having a self-contained pacemaker was a significant step forward in medicine. But the pacemaker still needed a source of power, and Greatbatch ended up getting into the lithium battery business in order to create a better, longer-lasting power supply for the pacemaker [source: MIT]. Greatbatch died in 2011, but the need for a more satisfactory source of energy for the pacemaker continued.

In 2014, researchers made it sound like that search might be over. An interdisciplinary research team (including scientists and cardiologists from Northwestern University, University of Illinois and the University of Arizona) developed a device that uses the motion of heartbeats (as well as the motion of the lungs and diaphragm) to power an implanted pacemaker. While the self-powered pacemakers haven't yet been tested on humans, they have so far had successful trials with cows, sheep and pigs.

Even better? Although the technology was tested for a pacemaker, it could have broad uses for any implanted device that uses battery power. Think cochlear implants, implanted defibrillators, even heart rate monitors -- all of these devices use batteries that require changing. Replacing those batteries usually means a potentially risky surgical procedure [source: Dagdeviren et al.]. So how does our body produce enough voltage to keep a pacemaker in working order? Read on for the nitty-gritty.

Totally Clipped to the Heart

The premise sounds space-age enough: an implant that converts the mechanical energy of the heart to electrical energy, allowing a body to power the very mechanism that is keeping it alive. But the actual mechanics of the implant are pretty easy to understand, while still being a gigantic scientific leap forward.

The implant itself is a flexible film that's piezoelectric -- that means that when the material is flexed (or when pressure is applied in general), it generates electrical energy. If this sounds out of this world, consider that piezoelectric materials are actually used in something as everyday as your inkjet printer. Piezoelectric crystals in the printer have a small charge that cause a vibration, which in turn disperses ink onto paper.

When the flexible, piezoelectric nanostrips of the pacemaker implant are pressed, an electrical signal pops up. The idea is that the beating of the heart -- or the movement of other organs, like your lungs and diaphragm as you breathe -- will press the material, and electricity will be harvested with every breath or beat. The rechargeable battery in the implant will thus be powered for as long as your heart ticks or your lungs fill.

The implant's piezoelectric material is made of lead zirconate titanate (PZT), which is actually a ceramic that is used in sensors [source: Fellman]. While piezoelectric devices were tested in 2012 as material for self-powered pacemakers, the PZT material was able to generate three to five times more current than the non PZT devices [source: Shankland]. The scientists have only tested it on animals, but were successful when it was attached to the heart, lungs or diaphragm -- successful enough to provide sufficient power to a 3.8-volt battery [source: Fellman]. They also found that placement was an issue; not every inch of our moving body worked equally. Placing the device on a heart ventricle at an angle seemed to work best [source: Marks and Rutkin].

In short? A heart-powered pacemaker isn't that far in the future. Even more significantly, it appears that this technology will be useful in all sorts of implanted electrical devices.

Author's Note: How can a heart power its own pacemaker?

For a supercool look at a piezoelectric pacemaker in action, you can watch a video here. Note that while it was tested on cows, sheep and pigs, all the animals were not conscious when the research was being conducted; we've still yet to see how the heartbeat-powered pacemakers would last in an active, awake animal.