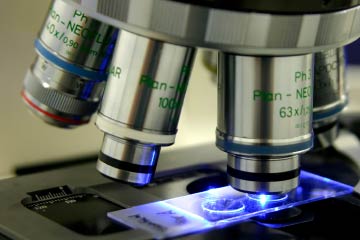 "Cancer" isn't a disease -- it's a term used to describe about 200 different types of diseases. All cancers have a few things in common, however. They're caused by mutations in our genetic material that make cells behave abnormally. They grow out of control and may destroy the cells around them or spread to other tissues. These mutations also keep the cells from dying according to their normal life cycle, which is part of why cancer cells can be so difficult to destroy.

When it comes to the development of cancer, two types of genes are involved: oncogenes and anti-oncogenes. Oncogenes are genes that have mutated within normal cells, causing them to start behaving like cancerous cells. Anti-oncogenes, or tumor suppressors, are genes that typically keep cells from becoming cancerous. When these genes mutate, this function is either compromised or completely suppressed.

At one time, a cancer diagnosis was a death sentence. Some forms of cancer are untreatable even now, but there are numerous treatment options for other types. Radiation, chemotherapy and surgery are some of the most well-known ways of treating cancer, but these have their limits -- as well as some pretty severe side effects. Finding a cure starts with learning more about exactly what causes those cells to mutate in the first place.

Until recently, it was thought that cancer was caused only by abnormalities within genes themselves. Now, researchers have discovered that some types of cancers are caused by changes in our epigenes -- a genetic code that sits on top of our DNA and affects the way that our genes express themselves. Epigenetic therapy may be able to treat some types of cancers, and it may also be able to prevent them from developing in the first place.

The Basics of Epigenetics

Epigenetics are chemical markers attached to our DNA that have ability to essentially turn genes on and off. DNA doesn't change over the course of our lifetime, and it's exactly the same in every cell in our bodies. This means that if you examined the genetic sequence in both your skin cells and your brain cells, you wouldn't be able to tell them apart.

But there are differences between those cells, because they perform very different functions. The difference is in the epigenes; these markers turn on the genes that tell a skin cell to behave like a skin cell, while turning off genes that it doesn't need, such as those that would make it act like a brain cell. In the beginning, each cell has the potential to grow into any type of tissue. This is how a single cell -- a zygote -- can form into all of the different types of tissues necessary to become a human being.

Epigenetics involves a process called DNA methylation, which takes place at a location along the DNA sequence called CpG islands. Our DNA comprises sequences of base pairs, abbreviated C, G, T and A. CpG islands are regions where the C, or cytosine nucleotide, is attached to its corresponding G base, or guanine nucleotide, by a phosphate. A methyl group is a "tag" attached to the C base. The genes are chemically altered, but the genetic sequence itself isn't changed.

The presence of the methyl group tells a gene not to express itself, also known as gene silencing. When the cell replicates, the methyl group will be passed down to the new cells. Three different enzymes, known as DNA methyltransferases (DNMTs), are responsible for DNA methylation. Epigenetics also determines how DNA in that particular genetic area will be wound around genetic proteins called histones. The more compact the DNA, the less likely it is for those particular genes to be expressed.

Epigenetics may help to solve the mystery of why identical twins -- who are believed to have the same basic genetic makeup -- can develop different hereditary diseases. These diseases may be caused more by epigenetic changes than genetic ones.

We've long known that cancer is caused by genetic abnormalities, but only recently have researchers discovered that epigenetic abnormalities can cause it, too. Epigenetic abnormalities occur in the process of DNA methylation. The creation of some oncogenes, responsible for the uncontrolled cell growth in cancer, begins when something goes wrong in the DNA methylation process. Hypermethylation occurs, which means that there's an overabundance of methyl tags attached to the C base. This abnormal message tells the cells to replicate much faster than normal. Some anti-oncogenes may also be the result of a problem that occurs during DNA methylation, in which the tags turn off the genes that would typically suppress the growth of tumors.

Researchers aren't completely sure why or how the DNA methylation process goes wrong. One theory is that our epigenes simply become abnormal over our lifetime as we experience tissue damage, either from aging or from environmental factors. An older person has more epigenetic damage than a younger person. When our tissue is damaged, our cells must divide and replicate in order to repair and replace it. Over time, the cells lose their ability to perform this function as accurately as they used to. The more frequently they have to divide, the more likely it is for something to go wrong. After a certain number of divisions (exactly how many is unknown), some epigenes appear to stop tagging the genes correctly.

Researchers working on the Human Genome Project expected to find 100,000 genes or more during the DNA mapping process, but found fewer than half of that. Epigenetic research may be able to explain some of the things that our genetic research alone can't.

If epigenetics can treat cancer, it's possible that it could prevent it from showing up in the first place. Of course, it's not possible to avoid the kind of tissue damage that occurs simply from aging. Nor can we prevent epigenetic abnormalities from occurring or reverse them early on in the process. However, perhaps we could one day successfully manipulate the mutated epigenes of people who are at higher risk of developing certain cancers. More research is needed to detect the abnormalities and turn the necessary genes on or off before they lead to cancer.

Some doctors have found success in treating some cancers with epigenetic therapy. Dr. Jean-Pierre Issa at the M.D. Anderson Cancer Center has conducted a study treating patients with a form of cancer called myelodysplastic syndrome (MDS). This cancer is likely caused by epigenetic abnormalities because it's only found in older people -- those with extensive cell damage caused by the aging process. MDS creates abnormal cells in bone marrow, and previously there was no effective treatment.

Epigenetic therapy seeks to turn on the genes that were turned off by epigenetics in the first place. Issa has found some success with the use of a drug called decitabine. This drug has similar properties to the cytosine base found in our DNA code. It works by keeping the DNA methyltransferases (DNMTs) from carrying out the process of DNA methylation, which results in a reactivation of the genes. According to Issa, about half of the patients in the study with MDS or a similar cancer, acute myelogenous leukemia, have experienced complete remission after taking decitabine.

Researchers are working on other drugs to target the DNMTs and treat other types of cancer as well as other hereditary diseases. The American Academy of Cancer Research has also formed a Human Epigenome Task Force to identify and define epigenomes and study how cancer and other diseases might be treated by their manipulation. So while epigenetics can't currently prevent cancer, someday it might.

Arturas Petronis and Moshe Szyf, Canadian researchers now considered pioneers in the field of epigenetics, had a difficult time being taken seriously at first. Szyf was once told that his research was "a misguided attempt at scientific humor" and that he would never have a career if he focused on epigenetics.

Georgios Papanikolaou: Papa of the Pap Smear
How Do Ventilators Work? Why Are They So Critical for the COVID-19 Pandemic?
Ultrasound Helped a Patient Recover Remarkably From a Coma