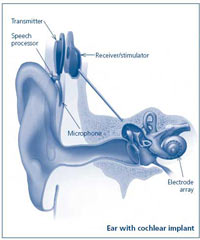 Traditional hearing aids work well for people with varying degrees of hearing loss, but they can't restore sound to people who are profoundly deaf. Cochlear implants work better in people with more severe ear damage because they bypass the damaged parts of the ear and send the sound information -- as electrical signals -- directly to the auditory nerve. Cochlear implants can be used alone or with traditional hearing aids in people who have mild hearing loss at some frequencies but more severe hearing loss at other frequencies.

The microphone, which is attached to the sound processor, captures sound and sends it to the sound processor, a small device that can be inconspicuously clipped over the outer ear. The transmitter sits behind the sound processor and connects to the scalp directly outside where the internal receiver is implanted under the skin. The transmitter is fitted with a magnet that holds it onto the internal receiver. (Instead of being fastened to the scalp and ear, the external system can also be carried in a shirt pocket or hip pouch.) The receiver, which is about the size of a quarter, is implanted under the skin in the bone behind the ear. And the electrode array is a wire that runs from the implant into the cochlea.

New bone-anchored (baha) hearing aids bypass the normal hearing process to help people with severe sensorineural, conductive or mixed hearing loss who can't be helped by regular hearing aids. Instead of merely amplifying sound, these surgically implanted devices attach to the bones in the middle ear. Bypassing the auditory canal and middle ear, baha hearing aids create vibrations in the skull and transmit those vibrations directly to the cochlea through a process called direct bone conduction.

Is one hearing aid enough?