How will nanobots help cure cancer? 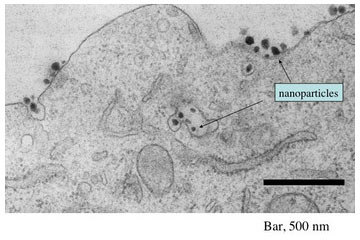 This electron micrograph from a study at Caltech shows several siRNA-containing targeted nanoparticles both entering and within a tumor cell.
Caltech/Swaroop Mishra

If you were a moviegoer in the 1980s, there's a solid chance you caught the flick "Innerspace." In this movie, the main character is miniaturized in a scientific experiment. The objective is to inject him and his tiny shuttle into a rabbit. Not everything goes as planned; he ends up inside a person instead. An action-packed storyline about how our pilot gets out then ensues. Sound far-fetched? Well, it may not be so fantastical in the scientific world of nanotechnology, where nanobots -- tiny robots -- may one day have such promising medical purposes.

In the ideal situation, nanobots -- possibly powered by the charged particles in our blood -- sneak through your body delivering medications or fixing your ailments. They could possibly be tracked via attached cameras or ultrasonic signals. Or, a more promising tracking method is using an MRI machine to interact with their magnetic nature [source: Vaidya].

Still sound like a fantasy? As it turns out, nanobots are becoming an optimistic type of treatment for cancer. But before you can learn about nanobots and their potential cancer-fighting nature, you need to understand how cancer develops. Genetic mutations change the way our cells behave. Instead of going about their normal business, our cells start growing abnormally, negatively affecting our tissues. So how do nanobots come into play in treating cancer? Read on to the next page to find out.

Nanobots to the Rescue

As we previously stated, cancer is when a genetic mutation affects the way a cell or cells behave, causing them to grow out of control or abnormally. So the goal of any cancer treatment is to get rid the body of those cells, or at best, manage the side effects. What better way to do that than to call in the nanobots?

Researchers at California Institute of Technology have already done just that. The Caltech team combined nanobots with Andrew Fire and Craig Mello's Noble Prize-winning discovery RNA interference from more than a decade ago [source: Hill]. Fire and Mello were looking for a way to disable genetic mutations of worms at their DNA. How did they do it? In cell production, DNA leads to messenger RNA (mRNA) that carries off the instructions for making important proteins. Fire and Mello used particles called small interfering RNAs, or siRNAs, to cut out unwanted pieces of the genetic code in the mRNA of their worm subjects [source: Hill].

Fast forward 10 years and the researchers at Caltech combined the RNA interference technology with nanotechnology and injected nanobots with siRNAs designed to cut out the genetic mutation for cancer in mRNA into the bloodstreams of cancer patients [source: California Institute of Technology]. Phase 1 of the clinical trial with 15 patients began in March 2010, and the data so far is promising [source: Hill].

If the studies continue to show promise, nanobots could be our best friends when it comes to cancer. We may be able to customize dosages based on cancer type, and they appear to leave good cells alone and work in conjunction with other treatments. For example, researchers at Georgia Institute of Technology and the Ovarian Cancer Institute are also studying the use of siRNAs. Their method is to hide a nanoparticle with siRNAs inside of a hyrogel, which then sneaks its way inside cancer cells. Once inside, it kills the cells and helps make chemotherapy more effective. The researchers have even been able to time the release of siRNAs from the nanobots to get the most out of them [source: Noyes].

Despite all of the promise nanobots may hold for cancer treatment, there are still a lot of unknowns. Could they get minds of their own and begin damaging good cells? What if our immune systems decide to reject them? Clearly there's one thing we can agree on: Much more research must be done.