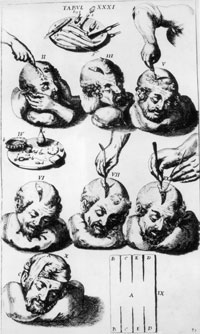 A circa 1600 instructional illustration for trepanning a skull. See more pictures of the brain.
Hulton Archive/Getty Images

The practice of medicine is an ancient one. A surgical procedure called trepanation shows just how long ago people began seeking to heal the ill and injured around them. Trepanation is the practice of opening the skull, usually to release pressure in the brain or free an individual from spirit possession or other metaphysical maladies. Evidence of this primitive form of cranial surgery dates back as far as the Neolithic period of 7000 to 2000 B.C. [source: Wellesley College].

Because trepanation seemed to be successful, the practice continued and spread. Archeologists studying Mesoamerican trepanation in Precolumbian Andean cultures found that patients had a survival rate of more than 70 percent [source: Tiesler Blos].

The use of drugs is just as old as surgery. At least as far back as the Kemites (ancient Egyptians), whose first pharaoh studied plants, and the Sumerians, who worshipped a goddess of medicine, humans were aware of medicinal plants. The era beginning 1500 B.C. saw an explosion of understanding of medicines, with cultures in China, Africa and India codifying their knowledge and documenting it for future generations [source: Heath].

These ancient practitioners identified what plants possessed various healing properties. In some cases, they attributed these properties to higher powers, but in large part, they accepted the medicinal powers of plants at face value -- the plants did what they did. As scientific inquiry developed, however, nothing could be taken at face value. The scientific method demands that the underlying processes of everything be understood.

Once science had a grasp on the interactions between drugs and the body, it became possible to synthesize natural compounds through chemistry. Science and tradition diverged. In the first edition of the American Pharmacopoeia, published in 1820, 70 percent of drugs were plant-based. In the 1960 edition, 5.3 percent were of plant origin [source: Royal Society of Medicine].

As divergent as folk medicine and modern medicine have become, chemists have occasionally doubled back to the traditional roots of medicine in order to move forward. Read the next page to find out about the role of plants in modern medicine.

Ethnobotany: The Winning Combination of Drugs and Plants 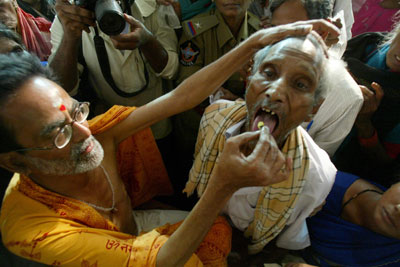 Without the aid of traditional healers like this man in India administering fish medicine to a patient in 2008, modern medicine would lack many of its most vital drugs.
Noah Seelam/AFP/Getty Images

Indigenous tribes can play a vital role in the creation of new drugs. The knowledge of medicinal plants these tribes possess is a starting point for modern science. Otherwise, researchers looking for naturally-occurring medicine would have the mundane and dangerous task of wandering the planet and randomly ingesting plants. Fortunately, anthropologists have discovered that there remains a vast amount of medicinal knowledge among indigenous tribes around the world that never made it into the annals of early Western pharmacology. As a result, a specialization of anthropology called ethnobotany developed. This is a hybridization of cultural anthropology and plant biology which leads practitioners deep into jungles and plains to uncover traditional medicinal knowledge in a process called natural products discovery [source: Service].

You Need It Like a Hole in the Head: The Ancient Medical Art of Trepanation
10 Ways That Doctors Treated Infections Before Antibiotics
Why doesn't the FDA regulate herbal supplements?

Being a Poop Donor Isn't as Easy as It Sounds
Georgios Papanikolaou: Papa of the Pap Smear
How are stem cells used in medicine today?