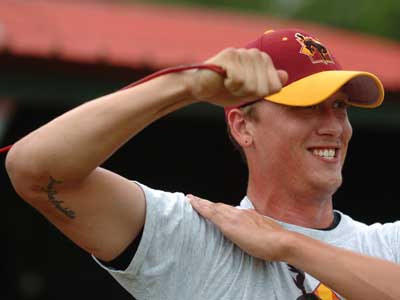 John Odom of the Laredo Broncos warms up his pitching arm, which bears a scar from Tommy John surgery with a tattoo that reads, in Latin, "poena par sapientia" or "pain equals wisdom."
AP Photo/Tia Owens-Powers

Sometimes humans just don't know when to quit. We're genetically wired to survive, and few ideas so enthrall us as the hero who refuses to stay down. Our bodies, on the other hand, generally don't live up to all those superhero expectations. You can strive for physical fitness all you want, but in the words of musician Warren Zevon, time treats everybody like a fool.

­There was a time when the battered soldier or athlete had to eventually hang up his or her boots and call it a career. With the right medical attention, today's active individuals can put that day off even longer. Aging sports stars continue to come back injury after injury, and even nonathletes take advantage of available procedures. Surgeons have observed a generational divide, with baby boomers and their progeny more likely to opt for reconstructive joint surgery than their predecessors [source: Aston]. After all, many of them observed sports stars bounce back from injuries well into their 40s. Why shouldn't they be able to handle less-strenuous activity in their 60s?

Professional baseball's popularity has led to escalation in not only sports medicine, but also in player performance. Doctors have observed overuse injuries, such as UCL tears, in baseball players as young as 8 years old. Athletes today are more likely to specialize in a sport at an early age and play it year round, encouraged by parents or the overarching glamour of the activity itself.

Before 1997, only 12 percent of Tommy John patients were younger than 18. By 2005, that number had risen to 33 percent. [source: Aston]. An 18-year-old's bones and cartilage are softer than those of an adult, making them more susceptible to trauma. Pitchers younger than 12 have an added worry: potentially damaging the sensitive, developing tissue in their arm joints. Injuries to these growth plates have become widespread enough for doctors to coin the term little leaguer's elbow [source: Fraser].

Many sports medicine experts think that increasing education is one way to prevent such injuries, as well as decreasing the influence of professional, hardcore sports on the games of children. Regardless, medical science continues to advance. How battered and stitch-ridden will the baseball stars of the future be?

Explore the links below to learn even more about baseball.