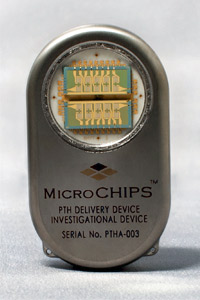 This microchip-based drug delivery device is programmable and can be wirelessly controlled to release each dose as specified.It's approximately 5 x 3 x 1 centimeters.
Photo courtesy of MicroCHIPS Inc.

Taking medicine daily may be the norm for people with chronic illnesses. But what if medications didn't have to be taken orally or through injections? What if doctors could put a pharmacy of sorts inside our bodies, activating treatment at the press of a button?

For people with medical conditions like multiple sclerosis or diabetes, that scenario could become a reality, thanks to developments in wireless drug delivery. The idea is to attach or implant a device in a patient, and the device would have prepackaged doses of medicine in it, which could be programmed or wirelessly commanded to be released in the body.

Take the technology used by a company called MicroCHIPS Inc., for example. Researchers inserted a small microchip beneath the skin in patients with osteoporosis [source: Farra et al.]. The team programmed and commanded the implanted chips to release tiny doses of medication -- about 40 micrograms -- in the patients' bodies over time. Routine injections were replaced by one chip doing all the work. Well, one chip and a few special radio signals.

And, as wild as it sounds, doctors might someday use cell phones to signal implanted chips.

"Ultimately, that signal can come from a cell phone, so the patient's cell phone can be receiving instructions from a physician located thousands of miles away," says Robert Farra, president of MicroCHIPS. "And their cell phones would be within reach of their bodies to instruct the device to release it on demand."

Wireless drug delivery might make you think of a scene from "Innerspace" or maybe "Escape From New York," but the reality is it's a growing field that shows promise for patients with chronic medical conditions.

Let's take a closer look at how these devices work once they set up shop inside a patient's body.

Peering Into a Wireless Microchip

Creating a mobile pharmacy within the human body has intrigued researchers and doctors for decades. The idea of using implants and programmable technology for treatments took root in the mid-1970s and early '80s [source: LaVan].

As of 2012, we see a range of products in development that could be wirelessly controlled. Most are small -- only a few centimeters in size. The MicroCHIPS device, for instance, has a programmable chip the size of your fingertip [source: MicroCHIPS]. Other devices that can be controlled wirelessly, like insulin pumps for people with diabetes, are larger and are often connected to the outside of a person's body.

Other parts of wireless drug delivery devices work at the nanoscale, meaning they can be as small as a billionth of a meter [source: Farra]. The tiny reservoirs in the MicroCHIPS implant we mentioned fall into the nanoscale size.

Here's how it works: A patient undergoes minor surgery at the doctor's office to have the device inserted beneath the skin. For MicroCHIPS's trial, the implant took about 20 to 30 minutes and minor anesthesia to put in [source: Farra]. The chip inside the device has an internal clock that can be programmed to release doses at timed intervals. When the device receives a signal, an electrical current travels through the chip, melting a platinum and titanium encasing and breaking open the small compartments that hold the medicine. This process is called electrothermal ablation. Once the encasing breaks down, the premeasured dose is released into the person's body.

In addition, the electrical current can also be controlled through a special radio signal unique to that device. In the small clinical trial done with MicroCHIPS, the implant provided therapy to seven patients for up to four months. Other designs may be able to work for a year or two before doctors need to take them out.

Other ways to control wireless devices could include heat and radiation signals, and potentially body sensors [source: LaVan et al.]. Researchers would like to make devices that can be refilled, while others will need to be surgically removed after use. Wireless devices can be beneficial because they don't need special encasings to make it through the digestive system.

Now that we know more about the tech involved, let's discuss who would benefit from wireless drug delivery.

Wireless Drug Delivery: For Everyone?

Despite the convenience of wireless drug delivery, it's probably not the best option for when your average Joe comes down with a cold.

People who could benefit the most from the technology have chronic medical conditions that require regular treatment. Experts say the devices could prove their worth for patients with osteoporosis, diabetes and multiple sclerosis [source: Farra]. There's also the potential for patients to use the wireless treatments for pain management and to treat certain ear injuries [source: Greenemeier].

For illnesses that require injections, needle treatments can take a toll both physically and mentally [source: LaVan]. Wireless drug delivery would be an option that could take away some of the stresses of receiving these treatments. However, dose size remains a drawback for the implants. If a patient needs a relatively large dose of medicine for each treatment, he or she probably wouldn't benefit from having a wireless implant just yet.

Scientists also hope to develop implantable sensors that can keep track of a patient's condition and send a signal to another device when treatment becomes necessary. Most treatments are being tested with adults, but the technology could also be used in children someday [source: Farra].

By now, you may be thinking, "Can an implant get sidetracked from someone hacking it?"

The truth is these companies make wireless products that are difficult to hack or take control of. Robert Farra, president of MicroCHIPS, says each of the company's devices has its own unique ID and radio frequency. The first microchips could only be signaled from inches away, while others might be activated from up to 4 meters (about 13 feet) away [source: Farra].

Worried about an implant going AWOL? Scientists who develop the technology also think about this, which is why devices are carefully programmed and managed.

With all the different types of medicines out there, it's also hard to fathom storing them in wireless drug-delivery devices. Some drugs are less stable and lose their effectiveness when kept a certain amount of time or in warmer temperatures. There's also the concern of patients having a bad immune system response to the implant. In general, implants being tested are made of the same bio-friendly materials used in other devices such as pacemakers.

With more developments, researchers may be able to tailor wireless treatment to each person, placing a cocktail of drugs in devices that can be released at the doctor's orders -- akin to a personal pharmacy, but on a microchip.

In Case You're Wondering ...

The MicroCHIPS device is designed to ensure that not all doses can be released simultaneously. If a component did fail, it couldn't do so in a way that would mean releasing the dose, says MicroCHIPS President Robert Farra. Also, limited power available in the circuit allows only one dose to be released at a time. A real-time clock chip that works in tandem with the software also makes sure that the doses aren't released all at once.

Mixing man with machine, wireless drug delivery could be a provocative alternative for patients who need regular medical treatment. These "pharmacies on a chip," as some call them, are slowly showing their potential. Though the technology behind drug delivery devices is fascinating, I couldn't ignore the underlying fact that people want to improve the quality of life for these patients -- a worthy goal, in my opinion.

How Personalized Medicine Works
How can a heart power its own pacemaker?
Grow New Teeth, Only 20 Minutes a Day