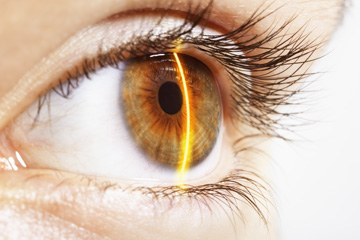 When it comes to creative fixes, the 21st century is pretty well-stocked. Want to lose weight? Get bariatric surgery. Want to quit smoking? Hire a hypnotherapist. Want to stop binge drinking? Shoot lasers into your head to cure your addiction.

So maybe that last one doesn't seem as familiar — or as accessible — as the first two. That's because, for one, it's not entirely true. While there is some evidence that lasers can affect addiction behaviors, it hasn't been tested on humans, and it's only been shown with one addictive drug.

The big study that caught everyone's attention — and no doubt inspired some young Hollywood types to order lasers in bulk — used rodents to test laser treatment of addiction. First, of course, researchers needed rats with an addiction. They didn't go for the easy play and get them hooked on cheddar; they gave the rats a strong urge for cocaine.

And here's an important note: They used genetically engineered rats that were bred to have specific proteins (rhodopsins) in their prefrontal cortex, which is the area of the brain that regulates behavior and control. These proteins are sensitive to light, so when the researchers shined a laser on them, the proteins were activated.

What they found was that the laser activation caused the rats to give up their coke habit. But even more telling, they found that turning off the proteins made the non-addicted rats desperately eager to sniff out some cocaine [source: Bardi]. The study in rats has lent more evidence that prefrontal cortex deficits affect addiction. By activating this region of the brain, scientists hypothesize, they could help restrain addictive behaviors in humans.

Don't expect that you'll be standing in front of a laser beam while waiting for your shopping mania to be cured. They would probably use electromagnetic stimulation in human trials to pinpoint the area. But if you're really dedicated to lasers, you should know that there is at least one study that posits that low-level laser acupuncture treatment could help alcohol addiction therapy [sources: Zalewska-Kazsubska, Obzejta].

What will medicine consider unethical in 100 years?
Why Do Antidepressants Have Warnings About Suicidal Thoughts?
Scientists Develop World's First Color 3D X-rays