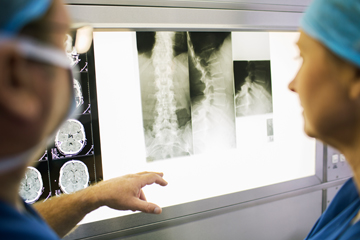 In the U.S., 27 million adults have major back pain. Not surprisingly, researchers are trying to find better ways to perform spine surgery.
Caiaimage/Sam Edwards/Getty Images

Doctors have been performing spinal surgery to treat herniated or degenerated discs since the 1930s, when two Massachusetts surgeons, Dr. William Jason Mixter and Dr. Joseph Seaton Barr, discovered that protrusion of a disc could press against a nerve, causing disabling back and leg pain [source: Boos and Aebi].

In the decades that followed, other surgeons worked to develop procedures that would fix damaged discs and alleviate pain without making the spine too rigid or unstable. Dr. Grafton Love, a surgeon at the Mayo Clinic, developed a technique called keyhole laminectomy in which he removed a tiny portion of the vertebra next to a damaged disc in order to relieve the pressure. In the mid-1960s, Dr. Lyman Smith came up with the idea of injecting medicine into a bulging disc to shrink it. In the late 1970s, other surgeons began to use microscopes while they performed spinal surgery, in order to perform increasingly delicate procedures. Soon afterward, doctors began experimenting with using a laser beam instead of surgical tools [source: Boos and Aebi]. And in the 2000s, the U.S. Food and Drug Administration (FDA) approved the use of prosthetic replacement discs made of steel and plastic [source: Johns Hopkins Medicine].

Even so, a lot of patients didn't get the relief they needed from spine surgery, and many got worse. In 2011, a study published in the journal Spine found that patients who underwent spinal fusion, a common procedure to stabilize damaged spines, were less likely to return to work and more likely to need pain medication afterward than those who decided not to have the operation [sources: Pearson, Carroll].

In recent years, though, medical researchers have been working to develop new methods and improve how spinal problems are treated to provide more relief to the 27 million U.S. adults who have major back pain [source: Carroll]. They've developed better tools, such as tiny scopes attached to retractor systems that open up a disc, so that surgeons can perform minimally invasive procedures and access the spine from different angles. They've also worked to improve the technology in artificial discs, and they're beginning to use robots to perform delicate procedures.

But probably the most promising new idea is using biologics -- chemical agents made by living organisms -- to stop damage to discs and even regenerate bone and restore spinal function. Some experts are hopeful that biologics will reduce the need to perform other types of surgery in the future [source: Kazemi et al.].