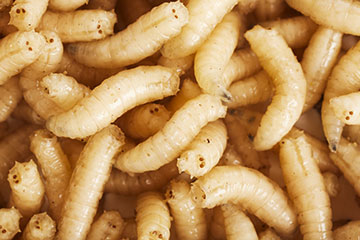 A very enlarged view of some maggots. They are usually the size of rice grains.
Science Photo Library/Getty Images

During World War I, wounded soldiers could lie unattended for days in the no-man's-land between trenches. If they lived, they'd sometimes return to their lines with gashes and cuts crawling with fly larvae. It must have seemed to them as though matters had gone from bad to worse, but an American surgeon named William Baer noted something curious about the maggot–ridden wounds: Compared to other soldier's injuries, they looked surprisingly healthy, showing fewer signs of inflammation or infection [sources: Gabrielsen; Handwerk].

Baer had rediscovered the medical value of maggots, a quality well known to Napoleon's Army doctors and probably used by civilizations as far back as the Mayans, or by native peoples from American Indians to Australian Aborigines [sources: Gabrielsen; Soy].

"Ick factor" aside, maggots have a lot to offer modern medicine in terms of stemming infections, speeding healing and saving money. Their forte lies in treating chronic wounds – injuries, like diabetic foot ulcers, that do not heal, or heal only slowly. In some cases, medical maggots can even help patients avoid amputation [source: Jukema et al.].

Maggots are but one example of the creatures used in biotherapy, a developing field that treats diseases using substances from living things. In this age, you might think of medical maggots as the leech's newest rival for the gag reflex award (the Food and Drug Administration has approved both creatures as medical devices). But whereas leeches suck blood — a vital quality in microsurgeries like limb reattachment, where blood buildup can kill — maggots slurp up the dead and infected tissue that hinders healing.

The FDA has also begun looking into bee-related products, a field known as apitherapy (Latin apis for bee). One example that has the medical world buzzing is bone wax, a mix of beeswax, olive oil and phenol used to stop bleeding in surgically sliced bones. Another biotherapy, bacteriophagetherapy, uses bacteria-eating viruses in place of antibiotics. Like maggot therapy, this Soviet medical technique grows more appealing as antibiotic-resistant bacteria force doctors to seek other ways to kibosh harmful microbes [source: Reardon].

Not all biotherapies are created equal, however. While some go through rigorous vetting as medical technologies, others remain little more than loose homeopathic tonics backed up by, at best, hearsay.

In other words, there's more to maggot therapy then an ace bandage and a few upended trashcans. You need to know what you're doing, and not just any maggot will do. 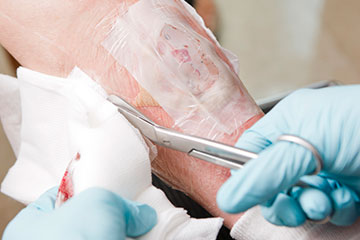 Several hundred sterile maggots are introduced into this patient's wound and secured in place by a tape dressing, to remove dead tissue.
Karen Mower/Getty Images

Before you go dropping fly larvae into your open wounds, there's a few things you'd perhaps like to know. Who are these maggots? Where do they come from? And, of course, how do they work?

As flies develop from eggs to adults, they stop off at a few stages along the way. In about half of fly species, this includes a larval phase unofficially known as a maggot – a pale, wormlike creature with a simple mission: eat, store energy and grow.

Not all maggots are suited for medicine: Some prefer to eat plants, while others carry diseases. Still others, such as the nightmare-fueling Internet celebrity Dermatobia hominis, aka the human botfly, develop inside living flesh.

No, the fly you want is Lucilia sericata, aka the common green bottle fly or sheep blowfly. Fans of "CSI" and of body farms, research centers that study corpse decay under a variety of conditions, know this creature for its worth in pinning down time of death. Because L. sericata lays its eggs in bodies very soon after a person's demise, experts can link their larval growth to elapsed time since death [source: Anderson and Kaufman].

Perhaps that's not the best picture to paint if we want to sell you on their healing power, but it makes the critical point, which is that L. sericata larvae only eat necrotic (dead) tissue and bacteria, not living flesh.

How do they do it? Contrary to what some have reported, they don't chew on you. In fact, they have no teeth. Instead, these maggots excrete enzymes that break down complex proteins into simpler, more digestible ones. They also use mouth hooks to scrape or grind the tissue as needed. Maggots also likely bump up oxygen in the wound and augment cell growth [sources: Gabrielsen, Anderson and Kaufman].

So where's your immune system in all of this? Your body doesn't attack the maggots because their secretions also break down complement proteins, part of the body's immune response. In fact, according to one study, these secretions reduce complement protein levels by 19-55 percent [source: Gabrielsen]. This is in fact a good thing. Too much complement activation can cause chronic inflammation, which can increase the chance of infection by keeping a wound open [source: Arnold]. Remarkably, the efficacy of this secretion appears not to taper off over time. In fact, researchers are now at work turning it into a drug.

Yet, for all their success, maggots had been enjoying a retirement from their medical practice since the 1940s, when the growth in antibiotic drugs brushed them aside. So what brought them out of retirement?

Maggots in Your Body — Some Comforting Facts

Medical maggots are pipsqueaks compared with the larvae you've seen in horror movies or on a fishing hook. They start out around 0.08 inches (2 millimeters) long and plump to a no bigger than 0.5 inches (12 millimeters) when removed [source: BioMonde]. Don't worry that the larvae will get lost, burrow into your body or hang out in the wound to breed or lay eggs. Larva need oxygen, and fully grown maggots will die unless they can leave the wound to form a pupa, the hard shell in which they grow their adult bodies [sources: BioMonde; NHS].

Based on the bulk of news coverage, antibiotic-resistant bacteria might seem a recent occurrence, one that began in the 1990s [sources: Arnold]. Actually, microbe strains sporting genetic defenses against antimicrobial agents began cropping up within a few short years of their medical debuts in the late 1930s and 1940s. In the 2010s, the problem has reached crisis levels [source: Davies and Davies].

Chronic wounds are one area particularly at risk for infections, including methicillin-resistant Staphylococcus aureus (MRSA) and hospital-acquired Pseudomonas infections. Treatment of these serious conditions involves isolating patients and exposing them to long, aggressive courses of antibiotics – a pricey prospect for the patient and a logistically taxing one for the hospital [source: Jones et al.].

Clearly, we need an alternative, one that destroys bacteria while helping to heal the stubborn wound. Enter the humble maggot.

Essentially, maggots change a chronic wound, one that drags on and on without healing, into an acute one in which the healing process can take hold. They do this by speeding up debridement, the removal of dead or tainted tissue, and granulation, the formation of lumpy, pink flesh holding new connective tissue and capillaries, necessary for healing. Maggots do this at a scale surgeons cannot reach, without calling for costly operating rooms or surgical staff [source: Jones et al.].

This blend of savings, success and easy access has inspired doctors to turn to maggots in countries like Kenya, where financial concerns make antibiotics or hospital visits a last resort for most residents [source: Soy].

Maggots have also proven their worth in treating the open sores, or ulcers, linked to diseases like diabetes. In diabetes, blood glucose levels rise too high because cells lack insulin or have problems using it. In some cases, diabetics develop poor circulation, or a loss of feeling in the foot called neuropathy. Both conditions can contribute to ulcer formation. High glucose levels only make matters worse, impeding the body's attempts to heal ulcers or fight infection [source: APMA].

Roughly 15 percent of diabetics will develop foot ulcers, and 14-24 percent of those patients will need an amputation [source: APMA]. Faced with these odds, it's not so strange that some patients find it in themselves to set aside their jitters and tolerate a few maggoty medics, especially as new tools make the process simpler and at least a little more palatable.

Medical maggot merchants raise larvae under controlled conditions. Farmers feed flies on a diet of bran, sugar and water until they are ready to lay eggs, then give them a nice slab of, say, ground cow liver in which to work their magic. They then sterilize the eggs using sodium hypochlorite and incubate them for 24 hours before they hatch [source: Soy].

Learning to Love and Live With Larvae

The FDA considers medical maggots a prescription-only medical device, so you'll need a doctor to prescribe them. You'll also want medical personnel to oversee the process, even as an outpatient. This can be tricky, since not all doctors are comfortable or familiar with MDT.

So how does it work?

To begin, doctors clean the wound, softening it if needed, since maggots much prefer wet and sloppy to hard and dry. They might also protect the nearby skin with a cream barrier if they think irritation likely, since maggot secretions are alkaline and contain ammonia [source: BioMonde].

From there, maggot wranglers have two main options. They can go "free range," sprinkling loose maggots onto the wound before covering it with a breathable dressing. Or they can apply a tea-bag-like polyester pouch that holds the maggots in a sealed sack. The package also contains special foam that helps sustain the critters. Either way, doctors work with farm-raised and sterilized larvae, which they will remove after leaving them in place for about 2-4 days of chowing down and growing. At that time, loose maggots will fall out of the wound, or doctors might pluck them out with forceps or rinse them out with saline [source: NHS]. They bagged variety simply come out with their sachet.

During MDT, patients should avoid bathing or showering, high heat, and anything that will pressure or smother the wound [sources: BioMonde; NHS]. During the first few days, wounds can become sloppy and a bit smelly, but changing the dressing should take care of that [source: Handwerk]. Some wounds will require multiple rounds of maggots, especially those treated with the bagged variety, since sachets prevent the larvae from digging in as deeply as their free-range colleagues do [sources: BioMonde; Jones et al.].

Sources remain mixed on the topic of pain linked to MDT, but it is a risk. Pressure might also build as the maggots grow, but doctors follow strict guidelines covering how many maggots to apply, based on the wound size and the fraction of it that needs debriding.

MDT is not for everyone. Guidelines warn against using it in wounds that bleed easily or that lie near large blood vessels, for example, or on patients taking blood thinners. And, of course, patients should avoid the bagged variety if they have allergies to polyester, PVA, fly larva or the growth medium ingredients, which include soy protein, yeast protein, potato starch and bovine protein [source: NHS].

In fact, MDT does not always beat traditional cures [source: Jones et al.]. But when all else fails, or when high costs place those options out of reach, it nice to know that nature has provided a cheap and effective, if wriggly, alternative.

More research is needed to determine the efficacy of maggot therapy, both comparatively and absolutely. Unfortunately, because maggots don't stand to make much money for the companies that offer them — unless, perhaps, they bioengineer and patent some kind of super-maggot — funding such research remains difficult.