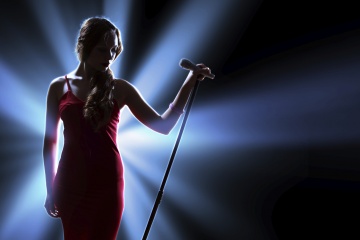 Could you be the singing superstar you always wanted to be, with a little help from an anticonvulsant medication?
Sergey Nivens/iStock/Thinkstock

Ever have that recurring dream where you're suddenly thrust onto a stage and expected to sing your heart out to an audience full of strangers? It can go a few different ways: The first is your run-of-the-mill nightmare where you clam up, forget the words and Taylor Swift disinvites you to her birthday party because you're so lame. But it also can be the rare kind of triumphant dream, where you open your mouth to discover you're an amazing singer capable of incredible feats of songistry, a term they invent to describe the originality of your talent. You steal Taylor Swift's boyfriend after the show.

But what if it weren't a dream? What if -- by taking a pill -- you could suddenly carry a tune without practice or training, after years of embarrassing karaoke performances and mumbled "Happy Birthday" refrains at parties? While we're not quite there yet, the reality is still tantalizingly close: Scientists from France, Canada, the U.S. and Great Britain have conducted a small study that shows that a supplement of the anticonvulsant medication valproic acid can help adults absorb lessons in perfect pitch.

To be fair, learning perfect pitch (or absolute pitch) isn't the same thing as magically turning into a songwriting chanteuse. But it also isn't something that's easily acquired, either: Only 0.01 percent of the population has spot-on pitch, and there have been no known cases of an adult being able to "learn" it [source: Gervain et al.].

But scientists can explain, to an extent, why that is. It turns out that those rare people with perfect pitch develop it during a so-called critical period. That's a time early in life when experience and training can influence lasting brain function and behavior [source: Gervain et al.]. They've also observed that an enzyme called histone-deacetylase (HDAC) seems to curb that critical period. So what if they were to inhibit HDAC later in life? Would that window reopen, allowing us all to tune an orchestra with nothing but a cheerful hum?

As we said, scientists believe perfect pitch is at least partly a learned function, or one that combines genetics, exposure and musical training during a certain developmental stage [source: Wertheimer].

Some compelling evidence for that idea comes from a randomized, double-blind study for which a group of 24 young men were either given a dose of valproic acid, an HDAC inhibitor, or a placebo. During the 15-day treatment, the men were shown training videos that taught them to identify six different pitch classes with six different proper names. (That was so the activity was fresh to those with and without a musical background -- though none had training early in life -- and to make sure it deviated from sounding too much like a musical theory lesson.)

After the 15 days, the subjects were tested. They were played a musical note and asked what name the note was associated with. After a few weeks of no treatment or training, the subjects switched and those given the placebo were administered valproic acid (and vice versa). The results proved pretty cool. Those who first went through training on valproic acid had a significantly higher instance of correct answers (5.09) than the placebo (3.50) -- and those their age, in general [source: Gervain et al.]. However, participant who took the valproic acid during the second phase of the experiment (after taking the placebo during the first phase) didn't do so well, and the study hypothesizes that there could be a "memory conflict," meaning that it was harder to keep track of a second set of proper names and corresponding pitches after previously learning a different set [source: Gervain et al.].

The research suggests that the valproic acid recreates a time of plasticity in the adult brain that's normally last seen during the earlier critical period -- and that idea has farther-reaching effects than simply allowing old folks to learn perfect pitch. The study might indicate that by inhibiting HDAC with a medication like valproic acid, you can learn all sorts of things normally reserved for the "critical period," like language acquisition. No longer will your 5-year old niece mock you for your inability to keep up with Spanish lessons on "Sesame Street."

This doesn't mean we should all rush out to collect valproic acid and a Mandarin tutor. The off-patent drug is normally prescribed for seizures or as a mood stabilizer, and can cause serious liver damage [source: National Library of Medicine]. In addition, scientists who conducted the study caution that critical periods developed for a reason; being too quick to circumvent or supplement that part of the brain's development might have unintended consequences, like erasing earlier "critical period" acquisitions [source: Wertheimer].

Author's Note: How could a pill give you perfect pitch?

As a person who would appreciate the label of tone-deaf as a justification for a terrible singing voice and lack of musical ability, I'm obviously interested in finding a cure-all for my lackluster karaoke performances. But the promise of valproic acid to contribute to skill development goes beyond perfect pitch. Let's hope that more studies can help us determine what is effective -- and safe -- when it comes to acquiring new proficiencies.

Smart Bandages Can Monitor, Treat Chronic Wounds
10 Things Doctors Have Reconsidered This Century
Being a Poop Donor Isn't as Easy as It Sounds