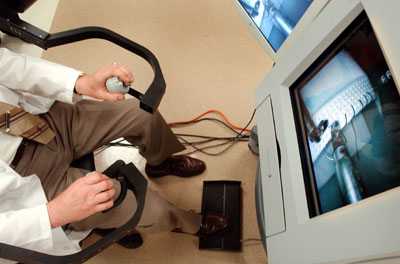 Humans make mistakes, and in an operating room, mistakes can be fatal. So it's only natural that robotic surgery appeals to so many people.

But if you're picturing Rosie from "The Jetsons" with scalpel in metal hand, don't worry. A more apt description of this type of process is robot-assisted surgery. Think of robotic surgery as being performed by one unit made of two parts: surgeon and machine.

The idea behind robotic surgery is that it helps eliminate human error -- and overcome human limitation.

Robotic surgery systems are designed to do what a human with a tray full of surgical instruments can't: perform complex procedures inside the body through a 1- to 2-centimeter (.39- to .79-inch) incision. That's the meaning of minimally invasive. Open-heart surgery, for example, can become closed-chest surgery.

The most widely known robotic surgical systems in the U.S. are probably the da Vinci system and the ZEUS system, which are both master-slave manipulators. As unappealing as the term may be, it helps us better visualize the operating room setup:

The surgeon is operating on you without touching you, removing the chance of a trembling hand (the tremor filter takes care of that) or a dropped tool.

These systems are used for cardiothoracic, colorectal, urological, gynecological, head and neck and even general surgeries, for conditions ranging from throat cancer to mitral valve prolapse. According to Intuitive Surgical Inc., the makers of the da Vinci system, as of June 30, 2011, there were 1,993 of the systems in more than 1,560 hospitals around the world [source: Intuitive Surgical]. The company also claims that in 2009, 86 percent of the 85,000 men who had prostate cancer surgery chose a robotic procedure [source: Kolata]. According to Marty Makary of the Johns Hopkins University School of Medicine, in four years, the use of robotics in common procedures has increased 400 percent [source: Johns Hopkins Medicine].

Considering that the U.S. Food and Drug Administration only approved these systems in 2000, the numbers are impressive. Clearly, robotic surgery has made progress in the marketplace.

But let's dig a little deeper.

Robotic surgery systems are expensive. As in, more than a million dollars expensive (somewhere between $1.3 and $1.7 million, as a matter of fact). Part of that cost is passed on to the patient, of course. A typical robot-assisted surgery is $1,500 to $2,000 more than traditional surgery [source: Kolata]. As the ongoing debate about the state of health care in the United States shows, it's hardly news that people with more money can afford better health care.

The question is whether robotic surgery is better.

Of the hospitals that advertise robotic surgery on their Web sites, 73 percent of them use stock text from the manufacturer to tout the benefits of the system: fewer complications, faster recovery time, less pain, less blood loss and improved cancer control [source: Johns Hopkins Medicine].

It doesn't take a brain surgeon to figure out that a hospital presenting information from a manufacturer with serious financial stakes in the outcome of patient choice is a conflict of interest -- especially considering that there's no body of rigorous scientific studies to back up the claimed benefits. (There are a few studies that show improved outcomes in certain types of surgeries, but not enough information to be conclusive or justify such strong claims without caveat.)

Robotic surgery has its risks, too. Remember that it's a new technology, and that it will take a surgeon a few hundred surgeries to become expert at it. The surgery requires anesthesia and is also very long, making anesthesia more complicated. You won't see much of that on hospital Web sites, however. For example, despite the growing number of prostate cancer surgeries (4 in 5 are robotic), fewer than half the men who had reported a satisfying sex life beforehand could get an erection after [source: NPR].

Hospitals are a business just like any other. They have to attract consumers in order to offset the costs of running the business, from staff salaries to expensive equipment like robotic surgery systems.

The difference is that most other businesses don't have access to a population that is ill and vulnerable, and their claims aren't a matter of life and death. If a cancer patient is told that a robotic surgery has a better chance of eradicating cancer but costs thousands of dollars or more, he or she is likely to try mightily to come up with that money. But as we've seen, there's no evidence that it's any more effective than the cheaper, traditional surgery.

The rise in robotic surgery, then, seems to be more the effect of marketing than proven clinical benefit.

Need some more information before booking your next surgery? Peruse the links and resources on the next page.

There are also robotic surgeries that don't involve actual surgery at all. These systems, such as Gamma Knife and Cyber Knife, use targeted radiotherapy to attack complex and "inoperable" tumors.