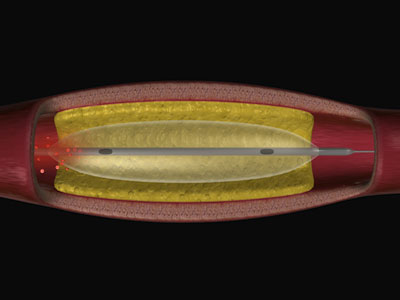 Four words you never want to hear from your doctor: "Your arteries are blocked." After the initial panic wears off, you think about all the cheeseburgers you've eaten over the years. You picture every French fry as a crunchy and delicious little grim reaper. A thousand egg, bacon and cheese sandwiches mock you.

The good news is that coronary artery disease (CAD) is very common and you have options, both surgical and non-invasive. How common? One in three Americans suffers from some kind of cardiovascular disease [source: American Heart Association]. Nine million of these Americans suffer from angina -- discomfort in the arms, lower jaw or chest due to reduced blood flow to your heart. The flow is reduced because of blockage from the buildup of plaque on the artery walls due to many factors including poor diet, a lack of exercise, heredity and whether you're a smoker.

If you suffer from angina, check in with your doctor as soon as possible to schedule a coronary angiography. This test involves injecting your arteries with x-ray dye and watching the path of the colored substance as it makes its way through your blood vessels. The narrowed and blocked pathways are discovered, and you and your doctor know how severe your problem is and what kind of treatment is best.

If your arteries are partially or fully blocked, you have a couple of options. The first is called angioplasty and it's preferred by about one-third of all CAD patients. Angioplasty is a nonsurgical procedure where a tiny deflated balloon is inserted into the problem spot of the artery on the end of a catheter tube. When it reaches the scene of the crime, the balloon is gently inflated for a few minutes, then deflated and removed. This compresses the plaque and opens the passageway for better blood flow. Sometimes, a tiny metallic cage called a stent is put in place to keep the artery open.

The other option is a surgical procedure called coronary artery bypass grafting (CABG). A vein from the leg or chest is sewn to the artery, before and after the blockage, serving as a side street for the blood to flow around the plaque. For years, a patient needed to have his or her chest opened and heart stopped to perform the surgery. Although that method is still used, other minimally invasive techniques have been perfected using robotic arms to perform the procedure. The robot is operated by the surgeon, and the arms are inserted into the chest area through small holes, allowing the heart to continue beating. 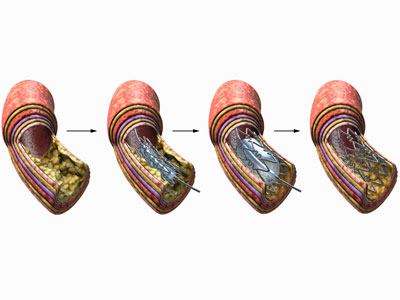