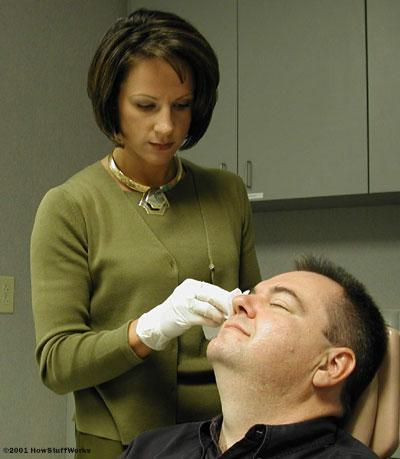 Cleaning the eyes and surrounding area

On the day of the surgery, I met with Erika Britt before the operation was scheduled to begin. Erika had me sign an informed consent. This is a document that states that you are aware of the risks involved with laser eye surgery and agree that you willingly assume those risks. Erika also went over the procedure with me so that I would know what to expect. Then she offered me a Valium to lessen the anxiety and nervousness.

After the briefing, I was led to a waiting area. When it was time for my procedure, an assistant took me into a preparation room and had me sit down while she put Alcaine in my eyes. Alcaine is a topical anesthetic that is safe to use in the eyes. The drops of Alcaine have a numbing effect that lessens the chance of any discomfort.

Sterilizing all the tools is an important part of the process.

I was then taken to the operating room. I laid down on a cushioned platform that was then rotated until my head was under the laser. Bryan Lemon, the laser engineer, instructed me to move my head until I was in the correct alignment. During the procedure, you cannot close your eyes. To keep this from happening, Melissa Wood, the LASIK technician that works with Dr. Kelly, used a couple of items.

And then the surgery...