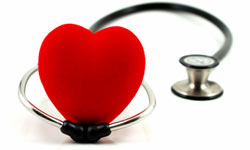 As heart function declines in the course of heart failure, the heart is unable to pump out all of the blood that enters its chambers and fluid starts building up in the lungs, arms, legs and abdomen. This condition, called fluid overload, is frequently associated with heart failure; in fact, heart failure is the leading cause of fluid overload.

Patients with heart failure and fluid overload are traditionally treated with diuretic drugs. However, studies have shown that this treatment is often ineffective. Data from the Acute Decompensated Heart Failure National Registry (ADHERE) show that most hospitalizations for heart failure are due to fluid overload in patients for whom oral diuretics are no longer effective. Even though intravenous diuretic drugs are used in 90 percent of hospitalized heart failure patients, a significant percentage of these patients still have symptoms of fluid overload when they leave the hospital. In fact, many of these patients must be hospitalized again for additional treatment.

In more than one out of four heart failure patients who are taking diuretics, these medicines lose their effectiveness before a normal fluid balance has been restored -- a condition known as diuretic resistance. When this happens, doctors may adjust the dose of the diuretic or change the timing of the dose. In some cases, it works better to give the diuretic continuously through a vein instead of giving it in individual oral doses. A second treatment approach uses combinations of different diuretic drugs that act on the kidneys in different ways, with the idea that different diuretic drugs acting together may produce an improved diuretic response. However, doctors have learned that treatments for diuretic resistance have limited success.

Concerns have been raised about the safety of the use of loop diuretics (a powerful type of diuretic drug) to treat fluid overload in heart failure patients, in addition to concerns about their effectiveness. According to a number of recent studies, the chronic use of loop diuretics in this patient population results in an increased risk of death.

Ultrafiltration is another treatment that has been shown to reduce fluid overload. In the past, doctors reserved ultrafiltration for fluid-overloaded heart failure patients who tried (and failed with) diuretics. However, a group of scientists conducted an experimental study to find out if ultrafiltration would work well in heart failure patients with fluid overload and diuretic resistance -- before intravenous diuretic drugs. They named the study the EUPHORIA trial (Early Ultrafiltration Therapy in Patients with Decompensated Heart Failure and Observed Resistance to Intervention with Diuretic Agents).

On the next page we'll find out what the EUPHORIA trial revealed about treatment for fluid overload.

Results of the EUPHORIA Trial

The EUPHORIA trial studied 20 patients with decompensated heart failure (a condition in which the heart is unable to keep the blood circulating well enough) and diuretic resistance. The doctors conducting the study wanted to see whether using ultrafiltration before intravenous diuretic drugs would result in removal of excess fluid and early discharge of patients from the hospital, without the patients' experiencing either low blood pressure or symptoms of worsening kidney disease. The patients were studied while they were hospitalized, and at 30 and 90 days after they were discharged.

An average of more than 8 liters of fluid was removed from the patients by ultrafiltration. Twelve patients were discharged from the hospital within three days of the procedure. Patients had improved symptoms of fluid overload and an average decrease in weight of about 6 kilograms (about 13 pounds) when they were discharged. (They lost weight because excess fluid was removed from their bodies.)

In the three months before the study, 10 hospitalizations occurred in nine patients. After undergoing ultrafiltration, only one patient was readmitted to the hospital in 30 days, and two patients were readmitted between 30 and 90 days for unrelated causes. The patients did not develop either low blood pressure or worsening kidney disease.

The doctors conducting the study also wanted to know whether the patients would feel better earlier in their hospitalization. Using two questionnaires (the Minnesota Living with Heart Failure Questionnaire and the Global Clinical Assessment) to determine how patients felt, they found that patients felt better after ultrafiltration, and at 30 and 90 days.

The doctors who conducted the EUPHORIA study concluded that, in heart failure patients with fluid overload and diuretic resistance, the use of ultrafiltration before the use of intravenous diuretic drugs effectively and safely decreases the length time patients have to be in the hospital and the number of times that they have to be readmitted to the hospital for additional treatment. In addition, the benefits that patients derive from ultrafiltration last at least three months.

To learn more about heart failure and treatments for fluid overload, take a look at the links on the next page.

Should Doctors Have to Pay Patients for Running Late?
What is the future of spine surgery?
How Paramedics Work