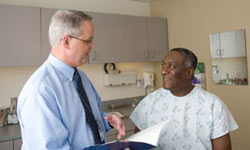 Fluid overload is a common medical problem that can be caused by a number of medical conditions -- including kidney failure, metabolic disease and heart failure -- and some surgeries and medications. But patients with heart failure represent the largest group of fluid-overloaded patients.

A common symptom associated with heart failure is troubled breathing or shortness of breath (dyspnea). This is the result of excess fluid in the lungs (pulmonary edema). As fluid buildup increases, difficulty breathing may become serious enough to interfere with sleep.

Fluid accumulation, or edema, can cause swelling of various parts of the body. Excess fluid retained by the body may result in weight gain, which sometimes occurs fairly quickly.

Another common symptom of heart failure is fatigue or tiredness. As fluid buildup increases and the heart's pumping capacity decreases, heart failure patients tire more and more easily. At first, activities like climbing stairs are difficult, but eventually, everyday activities such as walking and getting dressed are hard, too.

The traditional treatment for heart failure patients with symptoms of fluid overload is administration of diuretic drugs. However, this often doesn't work very well. Most hospitalizations for heart failure are due to fluid overload in patients for whom oral diuretics are no longer effective, according to data from the Acute Decompensated Heart Failure National Registry (ADHERE), the largest national heart failure registry, which launched in 2001. About 90 percent of hospitalized patients in the registry received intravenous diuretic drugs, but records show that, upon discharge from the hospital, many of them still had symptoms of fluid overload. The high rate of hospital readmissions in this group of patients may be, in part, a result of their persistent fluid overload.

In about 25 percent to 30 percent of heart failure patients with fluid overload who are treated with diuretics, the elimination of excess fluid stops before completion. This condition is called diuretic resistance. Doctors often try to overcome diuretic resistance by modifying the dose or method of administration of the diuretic drugs or by using combinations of diuretic drugs (they act in different ways and in different parts of the kidney). Sometimes, changing from an intermittent dose of oral diuretic to an intravenous diuretic can lead to more effective elimination of excess fluid.

Experience has shown, however, that it often isn't possible to effectively treat diuretic resistance. Some recent studies have also raised concerns about the safety of diuretics for heart failure patients with fluid overload -- their use in this patient population resulted in an increased risk of death.

Because diuretics stop working for many people with advanced heart failure, scientists began looking for another way to treat fluid overload, and they developed a procedure known as ultrafiltration. In this procedure, the patient's fluid-overloaded blood is withdrawn and -- before being returned to the patient -- passed through a filter that removes excess fluid. The UNLOAD study, which we'll learn about on the next page, compared the safety and efficacy of ultrafiltration with that of diuretic drugs.

Results of the UNLOAD Study

The official name of the UNLOAD study is "Ultrafiltration versus IV Diuretics for Patients Hospitalized for Acute Decompensated Congestive Heart Failure." Two hundred patients were enrolled in the trial, and they were divided into two groups -- one received diuretic treatment and the other received ultrafiltration treatment.

Ultrafiltration can remove as much as a pound of excess salt and water from the bloodstream each hour. Most patients undergoing this procedure stay in the hospital for an average of about three to four days.

For more information about heart failure, please take a look at the links on the next page.

Key Findings of the UNLOAD Study