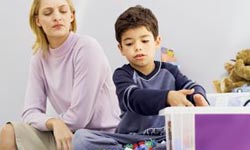 While the signs and symptoms of ADHD are easily recognizable, the diagnosis can only be arrived at through an interdisciplinary evaluation.
Stockbyte/Getty Images

Attention Deficit Hyperactivity Disorder, or ADHD, has become a household term over the last several years. We hear about it in the media, at PTA meetings, and in our own households. Kids who are hyperactive, inattentive, impulsive and who have behavior problems are often suspected to have ADHD. According to the American Psychiatric Association, it is estimated that there are approximately 1.6 to 2 million people who have this disorder.

It's a common disorder. And it's a treatable disorder. But it's often associated with significant prejudice and unfair bias. So, we must be careful to properly diagnose it.

While the signs and symptoms are easily recognizable, the diagnosis can only be arrived at through an interdisciplinary evaluation. The team includes: school teachers, parents, the primary pediatrician, and developmental pediatricians. The investigation involves a battery of tests of attention and other indicators.

There are strict guidelines for diagnosing ADHD. The fourth edition of the Diagnostic and Statistical Manual of Mental Disorders (DMS-IV), published by the American Psychiatric Association, states that the symptoms must be present for at least six months to a degree that causes poor functioning and inconsistent with developmental level.

In addition, some symptoms must be present prior to age seven, and in two or more settings (e.g., at school, work and home). There must be clear evidence of clinically significant impairment in social, academic or occupational functioning, and the impairment cannot be caused by other disorders such as anxiety, psychosis or pervasive developmental disorder (PDD, also known as autism).

What Else Could It Be?

To rule out behavior problems, vision problems, and allergies again requires a team approach. Each of the healthcare providers should share their evaluations so that a developmental specialist can appropriately assess the child's condition.

By ensuring that the correct diagnosis has been obtained, the course of treatment can be discussed with the parents. While many have heard of the stimulant medications Ritalin and Cylert, there are effective behavioral techniques that can be tried before and instead of medication. Remember, that drugs are not without their side effects.

Furthermore, children who are removed from mainstream classrooms for "special education" classes frequently suffer a blow to their self-esteem and future learning and social development.

Talk with your healthcare provider about getting the necessary referrals to specialists for help in diagnosing your child's situation.

For more information, see the links on the next page.