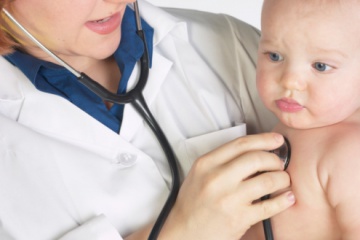 Parents and the child's pediatrician need to rule out disorders such as hearing loss, speech problems, mental retardation and neurological problems before seeking an autism specialist.
Hemera Technologies/AbleStock.com/Thinkstock

Parents are usually the first to notice unusual behaviors in their child. In many cases, their baby seemed "different" from birth-being unresponsive to people and toys, or focusing intently on one item for long periods of time. The first signs of autism may also appear in children who had been developing normally. When an affectionate, babbling toddler suddenly becomes silent, withdrawn, violent, or self-abusive, something is wrong.

Even so, years may go by before the family seeks a diagnosis. Well-meaning friends and relatives sometimes help parents ignore the problems with reassurances that "Every child is different," or "Janie can talk, she just doesn't want to!" Unfortunately, this only delays getting appropriate assessment and treatment for the child.

To date, there are no medical tests like x-rays or blood tests that detect autism. And no two children with the disorder behave the same way. In addition, several conditions can cause symptoms that resemble those of autism. So parents and the child's pediatrician need to rule out other disorders, including hearing loss, speech problems, mental retardation, and neurological problems. But once these possibilities have been eliminated, a visit to a professional who specializes in autism is necessary. Such specialists include people with the professional titles of child psychiatrist, child psychologist, developmental pediatrician, or pediatric neurologist.

Autism specialists use a variety of methods to identify the disorder. Using a standardized rating scale, the specialist closely observes and evaluates the child's language and social behavior. A structured interview is also used to elicit information from parents about the child's behavior and early development. Reviewing family videotapes, photos, and baby albums may help parents recall when each behavior first occurred and when the child reached certain developmental milestones. The specialists may also test for certain genetic and neurological problems.

After assessing observations and test results, the specialist makes a diagnosis of autism only if there is clear evidence of:

People with autism generally have some impairment within each category, although the severity of each symptom may vary. The diagnostic criteria also require that these symptoms appear by age 3.

However, some specialists are reluctant to give a diagnosis of autism. They fear that it will cause parents to lose hope. As a result, they may apply a more general term that simply describes the child's behaviors or sensory deficits. "Severe communication disorder with autism-like behaviors," "multi-sensory system disorder," and "sensory integration dysfunction" are some of the terms that are used. Children with milder or fewer symptoms are often diagnosed as having Pervasive Developmental Disorder (PDD).

Although terms like Asperger's Disorder and PDD do not significantly change treatment options, they may keep the child from receiving the full range of specialized educational services available to children diagnosed with autism. They may also give parents false hope that their child's problems are only temporary.