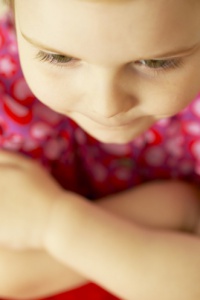 Most children with autism seem to have tremendous difficulty learning to engage in the give-and-take of everyday human interaction.
Getty Images/Photos.com/Thinkstock

From the start, most infants are social beings. Early in life, they gaze at people, turn toward voices, endearingly grasp a finger, and even smile.

In contrast, most children with autism seem to have tremendous difficulty learning to engage in the give-and-take of everyday human interaction. Even in the first few months of life, many do not interact and they avoid eye contact. They seem to prefer being alone. They may resist attention and affection or passively accept hugs and cuddling. Later, they seldom seek comfort or respond to anger or affection. Unlike other children, they rarely become upset when the parent leaves or show pleasure when the parent returns. Parents who looked forward to the joys of cuddling, teaching, and playing with their child may feel crushed by this lack of response.

Children with autism also take longer to learn to interpret what others are thinking and feeling. Subtle social cues-whether a smile, a wink, or a grimace-may have little meaning. To a child who misses these cues, "Come here," always means the same thing, whether the speaker is smiling and extending her arms for a hug or squinting and planting her fists on her hips. Without the ability to interpret gestures and facial expressions, the social world may seem bewildering.

To compound the problem, people with autism have problems seeing things from another person's perspective. Most 5-year-olds understand that other people have different information, feelings, and goals than they have. A person with autism may lack such understanding. This inability leaves them unable to predict or understand other people's actions.

Some people with autism also tend to be physically aggressive at times, making social relationships still more difficult. Some lose control, particularly when they're in a strange or overwhelming environment, or when angry and frustrated. They are capable at times of breaking things, attacking others, or harming themselves. Alan, for example, may fall into a rage, biting and kicking when he is frustrated or angry. Paul, when tense or overwhelmed, may break a window or throw things. Others are self-destructive, banging their heads, pulling their hair or biting their arms.

More more information about autism and signs of autism, see the next page.