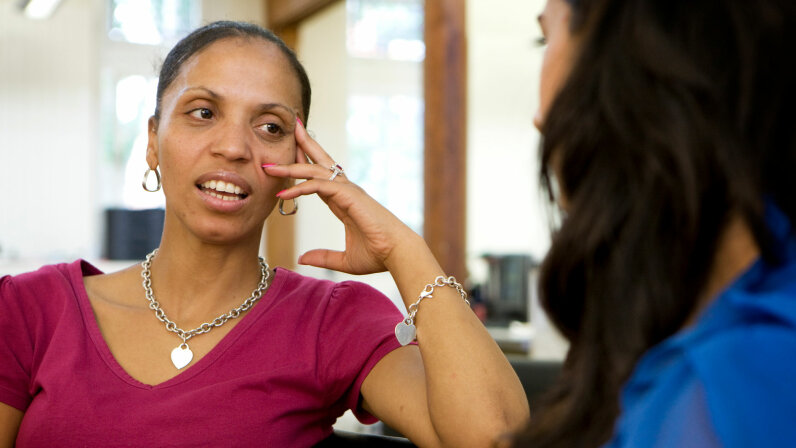 Cultural issues against seeking therapy — as well as the low number of black psychologists — are some of the reasons African-Americans are less likely than white Americans to get mental help. track5/Getty Images

Mental health issues carry a stigma seen across cultures and groups, but few (if any) bear the burden more than the black community. In the Stuff Mom Never Told You podcast episode "Mental Health in Black Communities," Emilie Aries and Bridget Todd (a proud, therapy-going black woman herself) tackle why this stigma exists, who it particularly affects and the far-reaching consequences of not getting help.

For many African-Americans, seeking help for mental health issues is virtually unheard of, even though they are 20 percent more likely to experience serious psychological distress than whites. A study from the American Psychological Association found that young adult African-Americans, especially those with higher levels of education, are less likely than their white counterparts to seek mental health services.

"Black folks and mental health have been kind of a thorny topic because it's so taboo," Bridget explains. "I grew up with this adage 'black folks don't go to therapy, we go to church.'" This longstanding mindset could date back to slavery because back then showing weakness, such as mental illness, meant you might not survive. This tendency to "do it all with a brave face and never let them see you sweat" was common then and persists today. "I can see how historically that might have been a strength and a way to cope, but now it's not doing us any favors," Bridget says.

And issues surrounding slavery's legacy may affect the mental health of future generations. Emilie points to research of Holocaust survivors and their offspring which showed that there is potential for trauma to be internalized and imprinted onto DNA, and possibly passed on to future generations. This phenomenon is called epigenetic inheritance.

The status of the mental health industry as being for the "white and wealthy" might also deter people of color from seeking help because they aren't confident that a white therapist will understand what they're grappling with in life. "And that ability to empathize is so critically important," Emilie explains. "I think some therapists might push back on that and say, 'I don't need to be my clientele to help my clientele,' but at the same time, representation matters, period. So, having options as an individual and seeking out therapists who look like you, feel like you, can understand and empathize with you from a cultural perspective, I'm sure that can lower the barrier for entry," she adds. (Just 2 percent of American Psychological Association members are black.)

"Therapy changed my life," says Bridget, who notes that her own therapist is not black, although she has a degree from Howard University, a historically black institution. "Going to therapy and learning how to talk about my behavior and my issues and understand them, that has been a tremendous help in my life," she says. "I don't know where I'd be without it."

There's been a slow shift in progress, with many black artists and public figures — like Issa Rae, Jay-Z and Kid Cudi — using their positions to further minority mental health awareness. "We are seeing raised awareness around this. We are not seeing political movement around this, which is what there needs to be," Emilie says.

However, even new policies won't fully solve the problem. "I don't act think this is an issue that can be solved, 'if you're a black woman go see a shrink,' I think this is a systemic cultural change around how we think about, talk about and deal with the mental health of people of color," Bridget says.

To get more information — or the name of a therapist — go to Ourselvesblack.com or the Black Mental Health Alliance. To hear this episode, download "Mental Health in Black Communities."