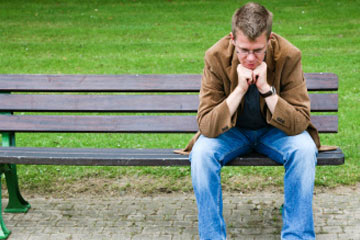 Many people struggle with episodes of depression, but catatonic symptoms are extremely rare.
iStockphoto/Thinkstock

Depression affects an estimated one out of every six American adults every year [source: Merck Manual]. We're not talking about a couple days of the blues from time to time -- major depression is a disabling illness. It causes persistent and overwhelming feelings of sadness and hopelessness, negative thoughts and feelings, loss of interest in normal everyday activities, excessive feelings of guilt, thoughts of suicide or attempted suicide. Depression may also cause physical symptoms such as aches and pains, significant weight loss or gain, restlessness, low libido, sleeping too much or too little, fatigue and sometimes mental sluggishness and physical slowness [source: American Psychological Association]. To be diagnosed as a major depressive episode, a person's symptoms must last for at least two consecutive weeks.

Depression doesn't look the same from person to person. Because of those individual variations, clinicians use terms called specifiers to describe each major depressive episode with greater detail. For instance, episodes may be mild, moderate or severe, and can be single episode or recurrent. They may be triggered by seasonal changes (such as seasonal affective disorder), or develop in women during postpartum (postpartum depression). Specifiers are also used to describe any atypical, melancholic, psychotic or catatonic symptoms (called features) an individual may experience from episode to episode. Specifiers may also be used to indicate if a patient is in partial or full remission.

Let's look at an example. A woman suffering from her first major depressive episode about six weeks after giving birth to her daughter might be described as having major depression, single episode (because it's her first), with postpartum onset.

Catatonic depression is a type of mental illness more commonly known as major depression with catatonic features. Let's figure out what that means.

Catatonia is tricky. It's a problem with psychomotor activity, which means a person suffering from catatonic impairment is having trouble controlling their voluntary movements. Alone, it's not its own diagnosis -- there's something else going on. Catatonia is most commonly associated with some mental illnesses, most often depression, mania and other mood disorders, but the condition is also a sub-type of schizophrenia, a psychotic illness. The risk of finding yourself in a catatonic state also increases if you suffer from some relatively common diseases and infections including HIV and other viral infections, heat stroke, Parkinson's disease and autoimmune diseases. Drug withdrawals or interactions may also cause catatonic symptoms in some people [source: Taylor].

When we think of someone in a catatonic state, what comes to mind? A person unable to move, speak or respond to external stimulation is a common picture of catatonia, and is likely what most of us imagine when we hear someone is catatonic. The "with catatonic features" specifier means more than the clinical observation that a person is suffering from a catatonic stupor and mutism, though, although those are two common symptoms.

A person suffering from psychomotor problems might also have symptoms that include catalepsy (a prolonged immobile, unresponsive state), waxy flexibility (a person is immobile but can be repositioned), negativism, echolalia (involuntary mimicking of another person's speech) and echopraxia (involuntary mimicking of another person's movements). Sometimes catatonic individuals have odd voluntary movements (such as holding awkward poses for extended periods of time), repetitive movements or excited and excessive yet completely purposeless movements.

In the 1990 movie "Awakenings," Robert DeNiro plays character Leonard Lowe, a patient suffering from catatonic symptoms after surviving encephalitis lethargic, a form of encephalitis that robs sufferers of their movement and speech.

Depression is a mental illness thought to be caused by a combination of things, from psychological to biological factors as well as your genetics and your environment. It's considered a neuropsychiatric illness.

The treatment for neuropsychiatric illnesses such as depression varies from person to person, based on each individual's symptoms and the severity. Major depression can be -- and commonly is -- successfully managed with either psychotropic medications (such as antidepressants to help re-balance neurotransmitters in the brain) or psychotherapy (also called "talk therapy," including cognitive-behavioral therapy and interpersonal therapy), or a combination of both drug and talk therapies.

Catatonic depression often responds well to psychotropic drug therapies, including benzodiazepines, anticonvulsants and antiepileptics. When depression is complicated by symptoms of catatonia, mental health professionals have found that a once maligned therapy -- neurostimulation -- often has a high success rate for relieving symptoms. Electroconvulsive therapy (ECT), sometimes called shock therapy, is a form of neurostimulation therapy.

ECT has changed over the years, and despite its formerly bad reputation, it can be a successful treatment for people who need immediate treatment, people with severe depression or people who aren't improving with medication and psychotherapy alone (known as treatment-resistant depression).

ECT works by causing a seizure in the brain. During this treatment, patients are placed under general anesthesia and an electrical current is administered to the brain through electrode pads that are affixed to the head. This causes a seizure. While it is known that ECT affects many of the body's systems, including the central nervous system and neurotransmitter systems, the reason why ECT is successful in treating symptoms of catatonic depression still remains unclear. One theory is that the changes made by the the electrical current to the body's neurotransmitter systems helps to relieve symptoms. Think of it as if the electrical current rebooted those systems similar to the way you might think of a computer rebooting.

There is often no single treatment for major depression with catatonic features, though, and some patients may find the most benefit from multiple therapies at the same time.

Can depression cause heart attacks?
Can clinical depression be completely cured?
What's social media depression -- and might I have it?