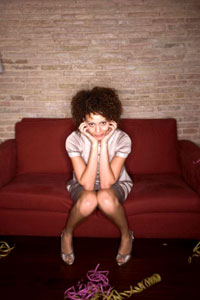 Some types of depression run in families, suggesting that a biological vulnerability can be inherited. This seems to be the case with bipolar disorder. Studies of families in which members of each generation develop bipolar disorder found that those with the illness have a somewhat different genetic makeup than those who do not get ill. However, the reverse is not true: Not everybody with the genetic makeup that causes vulnerability to bipolar disorder will have the illness. Apparently additional factors, possibly stresses at home, work, or school, are involved in its onset.

In some families, major depression also seems to occur generation after generation. However, it can also occur in people who have no family history of depression. Whether inherited or not, major depressive disorder is often associated with changes in brain structures or brain function.

People who have low self-esteem, who consistently view themselves and the world with pessimism or who are readily overwhelmed by stress, are prone to depression. Whether this represents a psychological predisposition or an early form of the illness is not clear.

In recent years, researchers have shown that physical changes in the body can be accompanied by mental changes as well. Medical illnesses such as stroke, a heart attack, cancer, Parkinson's disease, and hormonal disorders can cause depressive illness, making the sick person apathetic and unwilling to care for his or her physical needs, thus prolonging the recovery period. Also, a serious loss, difficult relationship, financial problem, or any stressful (unwelcome or even desired) change in life patterns can trigger a depressive episode. Very often, a combination of genetic, psychological, and environmental factors is involved in the onset of a depressive disorder. Later episodes of illness typically are precipitated by only mild stresses, or none at all.

Women experience depression about twice as often as men. Many hormonal factors may contribute to the increased rate of depression in women-particularly such factors as menstrual cycle changes, pregnancy, miscarriage, postpartum period, pre-menopause, and menopause. Many women also face additional stresses such as responsibilities both at work and home, single parenthood, and caring for children and for aging parents.

A recent NIMH study showed that in the case of severe premenstrual syndrome (PMS), women with a preexisting vulnerability to PMS experienced relief from mood and physical symptoms when their sex hormones were suppressed. Shortly after the hormones were re-introduced, they again developed symptoms of PMS. Women without a history of PMS reported no effects of the hormonal manipulation.

Many women are also particularly vulnerable after the birth of a baby. The hormonal and physical changes, as well as the added responsibility of a new life, can be factors that lead to postpartum depression in some women. While transient "blues" are common in new mothers, a full-blown depressive episode is not a normal occurrence and requires active intervention. Treatment by a sympathetic physician and the family's emotional support for the new mother are prime considerations in aiding her to recover her physical and mental well-being and her ability to care for and enjoy the infant.

Depression in Men and the Elderly

Depression can also affect the physical health in men differently from women. A new study shows that, although depression is associated with an increased risk of coronary heart disease in both men and women, only men suffer a high death rate.

Men's depression is often masked by alcohol or drugs, or by the socially acceptable habit of working excessively long hours. Depression typically shows up in men not as feeling hopeless and helpless, but as being irritable, angry, and discouraged; hence, depression may be difficult to recognize as such in men. Even if a man realizes that he is depressed, he may be less willing than a woman to seek help. Encouragement and support from concerned family members can make a difference. In the workplace, employee assistance professionals or worksite mental health programs can be of assistance in helping men understand and accept depression as a real illness that needs treatment.

Depression in the Elderly

Some people have the mistaken idea that it is normal for the elderly to feel depressed. On the contrary, most older people feel satisfied with their lives. Sometimes, though, when depression develops, it may be dismissed as a normal part of aging. Depression in the elderly, undiagnosed and untreated, causes needless suffering for the family and for the individual who could otherwise live a fruitful life. When he or she does go to the doctor, the symptoms described are usually physical, for the older person is often reluctant to discuss feelings of hopelessness, sadness, loss of interest in normally pleasurable activities, or extremely prolonged grief after a loss.

Recognizing how depressive symptoms in older people are often missed, many health care professionals are learning to identify and treat the underlying depression. They recognize that some symptoms may be side effects of medication the older person is taking for a physical problem, or they may be caused by a co-occurring illness. If a diagnosis of depression is made, treatment with medication and/or psychotherapy will help the depressed person return to a happier, more fulfilling life. Recent research suggests that brief psychotherapy (talk therapies that help a person in day-to-day relationships or in learning to counter the distorted negative thinking that commonly accompanies depression) is effective in reducing symptoms in short-term depression in older persons who are medically ill. Psychotherapy is also useful in older patients who cannot or will not take medication. Efficacy studies show that late-life depression can be treated with psychotherapy.

Improved recognition and treatment of depression in late life will make those years more enjoyable and fulfilling for the depressed elderly person, the family, and caretakers.

Only in the past two decades has depression in children been taken very seriously. The depressed child may pretend to be sick, refuse to go to school, cling to a parent, or worry that the parent may die. Older children may sulk, get into trouble at school, be negative, grouchy, and feel misunderstood.

Because normal behaviors vary from one childhood stage to another, it can be difficult to tell whether a child is just going through a temporary "phase" or is suffering from depression. Sometimes the parents become worried about how the child's behavior has changed, or a teacher mentions that "your child doesn't seem to be himself."

In such a case, if a visit to the child's pediatrician rules out physical symptoms, the doctor will probably suggest that the child be evaluated, preferably by a psychiatrist who specializes in the treatment of children. If treatment is needed, the doctor may suggest that another therapist, usually a social worker or a psychologist, provide therapy while the psychiatrist will oversee medication if it is needed.

Parents should not be afraid to ask questions: What are the therapist's qualifications? What kind of therapy will the child have? Will the family as a whole participate in therapy? Will my child's therapy include an antidepressant? If so, what might the side effects be?

The National Institute of Mental Health (NIMH) has identified the use of medications for depression in children as an important area for research. The NIMH-supported Research Units on Pediatric Psychopharmacology (RUPPs) form a network of seven research sites where clinical studies on the effects of medications for mental disorders can be conducted in children and adolescents. Among the medications being studied are antidepressants, some of which have been found to be effective in treating children with depression, if properly monitored by the child's physician.

Suicide Afflicts Farmers at Rate Shockingly Higher Than All Other Jobs
What's social media depression -- and might I have it?
How are depression and anxiety related?