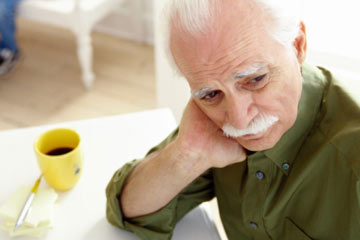 The Geriatric Depression Scale relies on questions that look for low energy levels, general dissatisfaction with life and other indicators that a senior may be depressed.
Stockbyte/Thinkstock

How can you tell when someone is depressed?

Sometimes, it's obvious. You may notice that your friend has started eating too much (or not at all), or that he's barely sleeping (or sleeps through the entire day). Perhaps no one's seen her in a while -- she's declined every social invitation and doesn't seem to have any energy.

The signs are easy to miss when other factors are clouding your judgment. With older people, for example, symptoms of depression can be confused with medication side effects or other conditions. A son or daughter may deny his or her parent's depression due to feelings of guilt. Depression can be written off as a bout of grief, or, worst of all, as just part of aging.

Wrinkles are a sign of aging. Depression is not.

Unlike skin elasticity, mental well-being can be regained with treatment. Left untreated, depression in older people increases any pain they may be experiencing, lengthens recovery times and impacts their nutrition levels [source: Kurlowicz and Harvath]. In other words, it leaves them in such ill health that death rates increase, as well.

In addition to making death from illness or surgery more likely, depression can be more directly fatal. Of all age groups, older adults have the highest suicide rate [source: Scogin].

But suicide is not an inevitable endpoint to depression. One study of 354 depressed patients aged 61 or older showed that more than a third of those who committed suicide saw their doctor within the week they killed themselves [source: Scogin]. Surely, there is room for prevention -- and certainly for screening.

There are many tests available to screen for depression in late life, but one of the most widely used methods is the Geriatric Depression Scale (GDS), developed in the 1980s by Dr. Jerome Yesavage of Stanford along with his colleagues. The GDS may very well be the gold standard for evaluating the need for psychiatric assessment in older populations.

To learn more about depression and mental health, visit the links and resources on the next page.

Is there a blood test for depression?
Can depression cause heart attacks?
What is atypical depression?