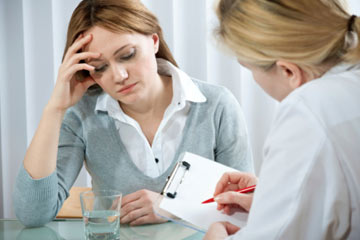 Everyone experiences unhappiness, but depression may be diagnosed when symptoms last for two consecutive weeks (or longer) and that are severe enough to interrupt daily life.
iStockphoto/Thinkstock

Twenty-six million or 46 million: One is the number of American adults living with mental illness and one is the number of Americans living with Type 2 diabetes, one of the fastest growing diseases in the U.S. right now. Would you be surprised that as many as 20 percent of American adults -- that's almost 46 million people -- suffered not from diabetes, but rather from a mental illness during the past year, and as many as 5 percent (that's about 11.5 million people) suffered so severely that their symptoms impaired their normal daily lives [source: Substance Abuse and Mental Health Service Administration]?

Anxiety disorders, eating disorders, impulse control disorders and addiction, mood disorders, personality disorders and psychotic disorders are the most common recognized types of mental health disease in the United States. If we look even closer, a little more than 24 million people are affected specifically by the symptoms of depression, a mood disorder, every year -- roughly the same number of American adults diagnosed with Type 2 diabetes [sources: American Foundation for Suicide Prevention, Centers for Disease Control and Prevention]. Like diabetes, mental illness is a medical condition that is a growing public health problem.

Mood disorders are the most commonly diagnosed mental health condition in the U.S., but can look and feel a bit different from person to person. Some people may have one mild depressive episode in a lifetime, while others may suffer from chronic periods of severe depression. Some may suffer from psychotic symptoms such as delusions or from symptoms of melancholia. Some people may have depressive episodes followed by periods of mania, known as bipolar disease. And even still, some forms of depression may be triggered postpartum, while others may follow a seasonal pattern.

Let's find out more about the symptoms of seasonal affective disorder next.

Seasonal affective disorder is a form of major depression. The symptoms of depression include persistent and excessive feelings of sadness, hopelessness and guilt, isolation and thoughts of suicide (or attempts) as well as physical symptoms such as headaches, low libido, sleep disturbances and gastrointestinal problems. A diagnosis of depression is made when a person suffers from symptoms that last for two consecutive weeks (or longer) and that are severe enough to interrupt daily life. Sometimes the episodes of bipolar disorder may be seasonally-driven, with depressive episodes during the autumn and winter followed by periods of mania during the spring and summer months (or vice-versa).

People with seasonal affective disorder suffer from episodes of depression that coincide with the change of the seasons, and otherwise don't report feelings of depression during the rest of the year. Winter depression sufferers tend to be socially withdrawn, uninterested in their normal activities, have low energy levels and difficulty concentrating. They sleep more and report being tired during the day. As many as 65 percent of SAD sufferers say they're hungrier during the winter months, and three-quarters report weight gain. While it's difficult for a lot of us to pass up a slice of warm bread or a comforting bowl of pasta, as many as seven out of 10 people suffering from SAD report strong and persistent cravings for those mood-boosting carbohydrates [source: Health.com]. Symptoms often begin in early autumn and peak during December, January and February.

Summer-onset SAD, on the other hand, is sometimes called reverse SAD because the symptoms are often the opposite of the more common winter-onset form of the disorder. Summer depression sufferers are more likely to experience agitation and anxiety, increased libido, difficulty sleeping, loss of appetite and weight loss. People with summer-onset SAD find their symptoms usually begin in the spring and peak during the longest months of summertime. Only about 10 percent of SAD sufferers have summer-onset SAD [source: Griffin].

How to Prevent Seasonal Depression 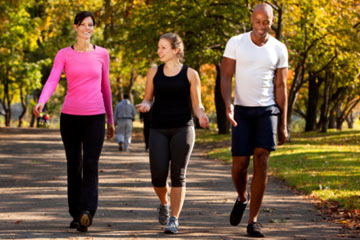 Regular exercise and spending time being social both help stave off bouts of seasonal depression.
iStockphoto/Thinkstock

There are several factors that have a role in the onset of depression, and for the seasonal type of the disorder, where you live, your hormones and your genes are considered three big influencers.

First let's look at your environment. Seasonal affective disorder becomes more common the farther away from the equator you live. For example it's a rare illness among people who live in the tropics (within 30 degrees north or south of the Equator) but travel 38 degrees north of the Equator to Washington, D.C., and you'll find roughly 4 percent of people suffer from symptoms of SAD. Keep heading north to Alaska, more than 60 degrees north of the Equator, and the number of sufferers jumps to almost 10 percent of the population [sources: Mental Health America, The Cleveland Clinic]. What's so special about living in the tropics? Daylight, a lot of it, and all year long.

There are two key components playing a role in the cause of SAD: changes in the amount of exposure to daylight and hormone imbalances. But how do these factors cause depression? No one is sure yet. There are many possibilities that boil down to two theories:

One is that a lack of sunlight may be bad for yourbiological clock. Your biological clock does more than give you jet lag and remind you you'll soon be too old to have biological children; it's your body's clock. The internal systems of your body all set their watches against the body's biological clock, so if the clock is broken, your body begins to less effectively regulate your mood, your sleep patterns and your hormones (including serotonin, a neurotransmitter associated with mood, and melatonin, which is associated with sleep). This theory suggests that by boosting your exposure to light you can reset your clock.

The second approach suggests that people suffering from SAD may have a chemical imbalance (again, serotonin and melatonin) not caused by a lack of exposure to light but rather best treated with exposure to light.

Working with what research has shown us so far, we have no way of preventing or curing depression, but often the symptoms of the illness can be managed. And those suffering from recurrent seasonal-onset depression may benefit from taking small preventative measures before any symptoms begin, either in the early autumn for winter onset or early spring for summer-onset SAD.

A few low-impact daily changes such as spending time being social to boost your mood and eating a well-balanced diet to help keep those carb cravings at bay may be helpful for some people, and if you're not already getting at least 30 minutes of exercise at least three times a week consider talking to your doctor about the benefits of starting a new workout. Exercise not only helps combat winter weight gain but is also a great way to boost your mood. Make extra effort to spend time outside every day, and be alert for symptoms so there's no delay in getting treatment if needed.

Drug therapy and talk therapy are two treatments commonly used to manage many forms of depression, including seasonal affective disorder. For example, selective serotonin re-uptake inhibitors (SSRIs), a type of antidepressant, may help restore the balance of serotonin, a neurotransmitter, in the brain. Talk therapy, specifically cognitive behavior therapy, may be helpful for SAD sufferers who could benefit from changing their perspective about winter (or summer), and working with a mental health professional may encourage the development of a preventative plan.

Light therapy, also called phototherapy, is a common treatment for seasonal affective disorder. This type of treatment makes sense as first-line therapy against SAD, since winter depression naturally lifts with the arrival of longer spring days, and light therapy mimics those longer days during the short winter months. There are two basic types of light therapy: a light box and dawn simulation.

Light boxes look like table or floor lamps. Most light boxes on the market right now provide white-light therapy with fluorescent or incandescent bulbs or light-emitting diodes (LEDs), although that may change as emerging research suggests blue light may have the most promise in relieving symptoms of depression.

How long you use your light box each day will depend on your symptoms, how strong the light is and how close you sit to the light box. Sitting less than 2 feet (0.6 meters) from a box with intense light may only require a daily 30-minute session, whereas sitting a greater distance away from the lamp or using a weaker light may require multi-hour sessions every day.

There are also light boxes that are dawn simulators. These turn on in the morning before you wake and gradually brighten to simulate dawn breaking. This type of light therapy may be helpful in resetting both melatonin production and your sleep patterns.

Light therapy has only a few mild side effects. Headaches are the most common, followed by eye strain, especially during the first days of treatment. Some people report nausea and irritability. Sleep problems may occur if treatment is given late in the day, and people with bipolar disorder have an increased risk of mania. Light boxes filter out damaging ultraviolet (UV) light, making therapy safe for your skin and eyes.

It's estimated that as many as 50 to 80 percent of people diagnosed with SAD will find relief with light therapy, as long as they stay vigilant about getting their daily light [source: National Alliance on Mental Illness]. For those who need additional help, antidepressant medications and cognitive behavior therapy are often effective co-treatments to light therapy.

"Seasonality" was first recognized as a trigger for clinical depression in 1984.

Can watching too much TV at night make you depressed?
'Gloomy Sunday:' The Song Linked to More Than 100 Suicides
Suicide Afflicts Farmers at Rate Shockingly Higher Than All Other Jobs