Why are alcohol and depression so commonly linked? 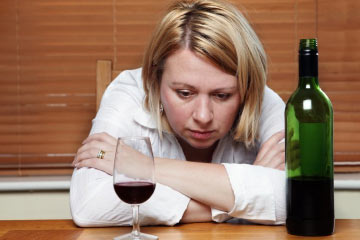 If you're diagnosed with either alcohol abuse or depression, you have a higher chance of being diagnosed with the other.
©iStockphoto.com/CaroleGomez

Alcohol abuse or dependence, a physical addiction, often acts as co-pilot with at least one mental health disorder, so it's little surprise that people experiencing problems with alcohol are more likely to also experience depression [source: Nurnberger]. Studies have found that if you're diagnosed with either alcohol abuse or depression, you have a higher chance of being diagnosed with the other [source: Harvard Health Publications].

When the two coexist, it presents a "chicken or the egg" scenario: Which came first? And if there's not a causal effect, are the two genetically linked? These are questions researchers, substance-abuse specialists and mental-health professionals are getting closer to answering.

Depression and alcohol abuse are similar in that each is more likely to occur in people who have a family history of the condition. When an individual has both conditions, it's also likely there's a genetic history of the combination [source: Nurnberger].

Depression -- or, more formally, "major depression" -- is an extended period during which a person feels overwhelmed by sadness, despair, hopelessness or anger in such a way that it interrupts the normal functioning of life [source: U.S. National Library of Medicine]. A common theory has been that people dealing with depression may self-medicate by abusing alcohol. In fact, a study conducted by the Harvard School of Public Health has shown that symptoms of depression were a precursor to alcohol dependence [US No Drugs].

If you're dealing with the loss of a family member, for instance, the immediate escape offered by alcohol would seem appealing. However, there's a price to pay for the alcohol-induced feelings of euphoria: dysphoria, the sense of anxiety, malaise and restlessness that so often occur the following day. If you again seek out the solace offered by intoxication, it creates a repeating cycle of self-induced highs and lows.

In some cases, increased alcohol use may be an attempt to secure a night's sleep, since insomnia is a symptom of depression. However, sleeping while intoxicated actually disturbs the normal sleep cycle, resulting in less effective and fulfilling sleep [Doghramji].

Depression and alcohol abuse are a dangerous combination. When a person feels life is not worth living, and then consumes a depressant that hinders good decision-making, it can lead to risky behaviors and even suicide.

But what if it's the other way around? What if alcohol abuse is the cause of depression, and not the effect? We'll consider that in the next section. 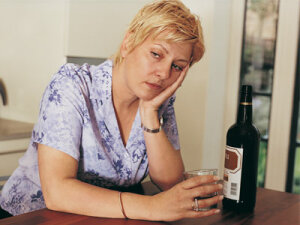 Are depressed people more prone to addiction -- and why?