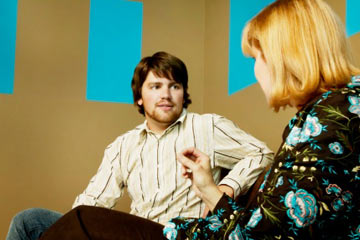 A primary goal of cognitive behavior therapy is to empower patients to recognize and take control of their own circumstances.
Design Pics/Thinkstock

Depression can be a paralyzing illness, as crippling as many physical ailments. But there are numerous treatments for depression, ranging from antidepressant medications to psychotherapies such as cognitive behavior therapy, or CBT.

In essence, CBT is a very direct, hands-on, goal-oriented approach to treating depression through psychotherapy. It's also being employed to treat a host of other mental conditions, including eating disorders, anxiety, bipolar disorder and schizophrenia.

The objective of CBT is to help depression patients rewire their outlook by recognizing and understanding negative thought patterns, accurately evaluating the efficacy of those thoughts, and replacing them with more appropriate and healthy thought processes [source: WebMD]. As Max Ehrmann wrote in his famous prose poem, Desiderata: "Do not distress yourself with imaginings. Many fears are born of fatigue and loneliness." Conversely, CBT helps people "interpret their environment and interactions with others in a positive and realistic way" [source: NIMH].

CBT is designed to be a short-term approach to depression that focuses on specific, tangible problems. Patients are asked to define goals for each session and the subsequent week, while also recognizing longer-term goals.

The therapist, meanwhile, employs specific -- and structured -- educational tools to teach patients how to monitor and capture any negative thoughts or images. It's not the therapist's job to "cure" a patient's depression, but instead to provide a roadmap to recovery. Likewise, CBT patients are expected to take an active role in finding or developing solutions to their depression, in each session as well as between sessions.

According to the American Academy of Family Physicians, roughly two-thirds of depression patients are treated successfully with medications. But for patients averse to medications, CBT has been found to be an effective alternative treatment of mild-to-moderate depression, even with the use of antidepressants. However, CBT can also be used in conjunction with antidepressants to treat people suffering from major depression. And according to a study in the Journal of the American Medical Association, CBT showed promise as a treatment for depression in teenagers, even if their parents also suffered from depression [source: US News].

Like many psychotherapies, it's difficult to pinpoint a specific timeframe for a positive outcome with CBT. However, since it deals with the present -- focusing on what and how a person thinks instead of why a person thinks that way -- CBT is considered to be a short-term depression treatment, limited to fewer than 20 weeks.

The first eight weeks are typically set aside for the patient to become familiar with the recommended skills and to understand the CBT model (many patients see a reduction of symptoms during this phase). Between eight and 12 weeks, patients often report a remission of depression symptoms, and the remaining sessions are usually reserved for further refinement and reinforcement of coping skills and to address any issues related to ending the therapy. More severe cases, however, may take longer to resolve [source: WebMD].

What are some cognitive behavior therapy techniques?

For starters, CBT begins with a frank and open discussion between patient and a trained therapist. Each subsequent 50-minute session, in general, begins with a review of the patient's mood and symptoms, and establishing reasonable short- and long-term goals. The agenda will typically review prior meetings, discuss homework assignments (including pitfalls and successes), assign new homework that addresses current needs and goals, and a summation of the session.

Two specific tasks form the basis of CBT. The first is cognitive restructuring, in which the therapist and patient work together to change thinking patterns. The second is behavioral activation, in which patients learn techniques to overcome obstacles to participating in pleasurable activities.

Who is a candidate for CBT?

Though any number of depression patients may benefit from CBT, research indicates that the approach is best suited for people who are motivated to change their situation and get better, who believes that they have control over their circumstances, and who have the ability for honest self-evaluation, or introspection [source: WebMD].

Journal writing. According to researchers at WebMD, "many people find that adding structure to the day can help with the symptoms of depression." Getting on a regular schedule -- mapping out each day -- can alleviate some of the anxiety that afflicts depression patients. But with CBT, the planner is also a journal, helping patients track their moods throughout the day, identifying what factors elicit certain responses. Over the course of several weeks, the journal may reveal patterns that would otherwise be difficult to decipher on a daily basis [source: WebMD].

Coping skills. Since CBT is an "educational" approach to depression, a critical element is problem solving. By working with a therapist, patients are able to recognize obstacles and learn techniques to deal with the patterns of depression that arise. Essentially, these are the tools to help the patient address his or her depression head on. So, instead of thinking the worse will inevitably happen, a patient is taught to recognize that negative pattern and find more positive alternatives. For example, rather than avoid a weekend camping trip because of the possibility that it might rain, patients can learn to acquire the correct gear that will allow them to enjoy the great outdoors no matter what Mother Nature brings to the forecast.

Since a primary goal of CBT is to empower patients to recognize and take control of their own individual circumstances, the homework aspect is critical in taking ownership as the patient moves toward recovery.

Does Your Doctor Screen You for Depression? Why Not?
Can depression cause heart attacks?
Reactive Depression