Does depression run in families? 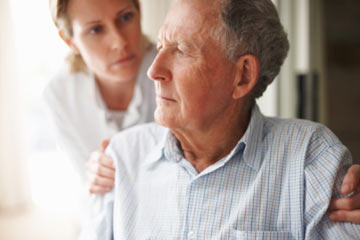 Studies have found that children are at higher risk of depression if one parent has a history of depression, and that risk is even higher if major depression affects both parents.
Hemera/Thinkstock

Depression manifests itself in many different ways. A person may become withdrawn, scatterbrained or extremely irritable. Sleep may go into overdrive or become scarce. Appetite may also be at one extreme or the other. Feelings of hopelessness, sadness or anxiety may dominate for weeks, months or even years.

Major depression (the clinical term for depression) is found among all demographics, affecting both men and women of all ages, even children. It may seem to settle in out of the blue or it can be triggered by an upsetting life event. In a given year, about 7 percent of American adults experience major depression [source: Simon].

Many different things can trigger a depressive episode. Loss of a loved one and divorce are high on the list for depression triggers. So too are health problems and job loss. Abuse of alcohol and drugs can also create a cycle of depression, wherein one attempts to alleviate feelings of depression with the very same substance abuse that partly spurred the condition in the first place. However, less obvious events -- like poor academic performance or traumatic events from the distant past -- can also play a hand.

For the person experiencing major depression, life can become hellish. Friendships may be abandoned, jobs may be lost and healthy lifestyle habits shunned. Previous joys -- hobbies, interests and activities -- become joyless. Suicide may not only begin to seem like a plausible option, but even perhaps the only available option.

Living with a person experiencing major depression is no bowl of cherries either. Depression can be difficult for family members as they grapple to understand behaviors of a loved one who has given up hope.

But blood relatives may have another hurdle to cross in their dealings with a loved one's depression: their own increased risk of one day battling major depression themselves. Does major depression run in families? What do the experts say? And what other factors may increase risk? We'll discuss these questions in the next section.

While one person going through a divorce may feel a variety of painful emotions that linger for many months or longer, another person may sink into clinical major depression. And genetics may explain why: The person experiencing depression was at much greater risk when the triggering event occurred due to hereditary factors.

Researchers have been looking for the specific genes responsible for major depression for years, fueled by the prospect of improving understanding, early detection and treatment. Studies, such as a recent one that surveyed 22,000 subjects, have found that children are at higher risk of depression if one parent has a history of depression, and that risk is even higher if major depression affects both parents [source: Dotinga].

Genetics seem to play a role in how we react to and process negative events. A multigenerational study of family members who survived a devastating 1988 earthquake in Armenia showed that genetics was a significant factor determining whether survivors developed major depression, anxiety or post-traumatic stress disorder [source: Cassels]. The study found that genetics was responsible for more than 60 percent of the variation in depressive symptoms among survivors.

The hippocampus -- a part of the brain tasked with processing memory and emotions -- tends to be smaller on average for people with major depression [source: Nazario]. Researchers aren't sure if this area of the brain is smaller due to genetics or if it shrinks from overexposure to the stress hormone cortisol that exists in higher levels in depressed people.

German researchers believe they've identified the gene responsible for major depression: SLC6A15 [source: Cell Press]. This particular gene is responsible for coding an amino acid transporter protein. Certain genetic variants, however, present themselves in people susceptible to major depression. These individuals have less expression of that gene in the hippocampus, and mice were shown to have less expression of the gene in question when faced with unrelenting social stress.

So while there are many different situational triggers for the onset of depression, some people may be predisposed to it from the beginning of their lives. While that thought in itself could be, well, depressing, knowing of one's risk of depression has many advantages. A person with this knowledge could be more aware of symptoms in early stages of depression. One could develop a pattern of obtaining annual or semi-annual screenings for depression by a trained professional. Finally, it could offer some sense of understanding when asking the question, "Why do I feel this way?"

Keep reading for lots more information about depression and heredity.

Depression Overview
What happens when depression is turned inward?
How are depression and anxiety related?

Can watching too much TV at night make you depressed?
Here's How You Help a Friend With Depression
Can clinical depression be completely cured?