How are hormones and depression related in adults? 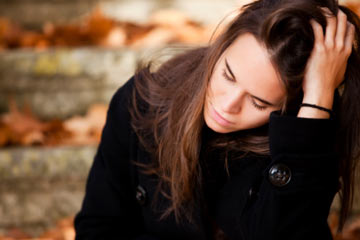 Women are more likely to develop depression than men, especially during pregnancy, after childbirth and following menopause -- times when hormonal fluctuation is high.
Hemera /Thinkstock

Major depression is a common problem among adults -- that persistent feeling of worthlessness and despair that may last weeks, months or years. In America alone, 15 million adults deal with major depression every single year [source: Simon].

Researchers are examining many possible causes, and one they're taking a closer look at is the role that hormones play in adult depression.

Hormones are chemical substances produced by glands of the endocrine system that travel throughout the body, delivering messages to tissues and organs that help regulate their function. Glands that produce hormones include the brain's hypothalamus and pituitary glands, as well as the thyroid, adrenal glands, ovaries, gonads, pancreas and parathyroid. The hormones produced by these glands maintain a delicate balance between your body's functions. Nearly everything is affected by hormones -- your mood, your physical development, your appetite and your fluctuating energy levels, to name a few of the big ones.

Hormones have profound effects upon our sense of well being [source: MedlinePlus]. The hormone oxytocin makes us more cooperative, influences maternal behavior and increases trust, while testosterone makes us less cooperative and more self-serving [source: Preidt]. In testosterone's defense, it also increases motivation and self-confidence, not to mention the sex drive [source: Mayo Clinic].

When hormonal levels fluctuate or certain hormones are over- or under-produced, the important messages hormones send are effectively muted -- or screamed at top volume. Due to the heavy burden of responsibility that hormones carry, any disturbance in their normal levels or functioning can cause all sorts of chaos in the mind and body.

For example, women with elevated levels of the hormones estrogen and testosterone ("sex hormones") following menopause are at increased risk of breast cancer [source: BioMed Central]. Too much human growth hormone -- injected to increase athletic performance and to slow the effects of aging -- can cause heart disease and (ironically) muscle weakness [source: Medical News].

Hormones affect our sleep patterns, our sense of hunger or fullness, energy levels and more. But are hormones responsible for depression?

The link between hormones and depression is still far from being fully understood, but a link certainly seems to exist.

When we are under stress, our bodies ramp up production of a stress hormone called cortisol. One interesting effect of cortisol is that it may to contribute to fat accumulation in the belly [source: University of Alabama at Birmingham]. This could partially explain a link between obesity and depression, because there doesn't appear to otherwise be a link between body mass index (BMI) and depression. Cortisol levels are normally highest in the morning, and taper off throughout the day. Adults -- and children -- whose cortisol levels remained higher than normal in the afternoon and night were found to be concurrently more likely to report symptoms of depression [source: The Endocrine Society].

Children of bipolar parents have four times the risk of developing mood disorders than children of non-bipolar parents, and the link again seems to be cortisol [source: Concordia University]. Children with bipolar parents are naturally more sensitive to cortisol, and respond to both major and minor stressors with ramped-up levels of the stress hormone.

Women are more likely to develop depression than men, especially during pregnancy, after childbirth and following menopause -- times when hormonal fluctuation is high [source: National Institute of Mental Health]. Interestingly, women are also more likely than men to develop disease of the thyroid, which is heavily involved in hormone production [source: Chakraburtty].

Abuse of alcohol has also been linked to depression, and alcohol abuse is also known to cause a multitude of irregularities when it comes to hormone production and function [source: National Institute on Alcohol Abuse and Alcoholism].

While a confluence of factors seem responsible for depression (including genetics, neurotransmitters and life events such as childhood trauma or divorce), researchers are increasingly confident that hormones, too, play an important -- if not fully understood -- role in adult depression.

See the next section for lots more information about hormones and depression.

What is depression?
Depression Overview
What is the link between depression and anger?