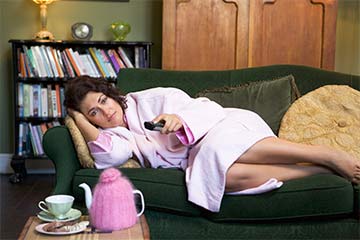 Watching TV itself doesn't cause depression, but experts think the light from the boob tube might have something to do with it.
Monkey Business Images/Thinkstock

You love to watch your favorite shows at night. It helps you wind down after a long day at work. But what if this routine -- the one you thought was helping you ease into a good night's sleep -- was actually pushing toward depression? There's a chance that could be the case.

A study conducted at the University of Pittsburg seems to have found a connection between television and depression -- in young adults at least [source: The Guardian]. And numerous other studies have linked those who watch TV at night to being at higher risk of depression. And while that's not the same thing as television actually causingdepression, the studies do all seem to point to one thing. It's not about the TV itself. It's about the light.

Exposure to artificial lights at night has been linked to all kinds of problems, many of them stemming from disrupting the body's production of melatonin, a hormone that not only regulates our sleep cycle, but also is an active antioxidant, scouring the body for free radicals. Melatonin is secreted in the absence of light (and while we're asleep), but humans have also only really been living with constantly available light for about a century now and our bodies haven't caught up. The mind and body need a stable sleep cycle, and adding an artificial light source at night, even a low one like a TV or a cell phone touchscreen, messes with the regulatory rhythms that our bodies use to keep under control.

There's also evidence that exposure to low light sources at night disrupts other physical and mental functions. A 2012 study published in Molecular Psychiatry found that hamsters who were exposed to low light at night showed depressive-like behavior on a cycle of 16 hours of normal light and 8 hours of dim light for one month. Hamsters on the dim light schedule eventually showed decreased appetites for sugar water, and when they were placed in water put less of an effort toward trying to swim. Fortunately, the depressive state was reversible, and once the hamsters were moved back to a natural light schedule they returned to a normal state of hamster positivity.

What makes this study interesting, though, is that the researchers also found a chemical link between low light at night and depression. Hamsters in the study who slept in low light also showed an increase in tumor necrosis factor (TNF), a protein that's usually responsible for immune responses but is linked to everything from Alzheimer's to cancer when the body fails to regulate it properly. A secondary finding of the study was that depressed hamsters with elevated TNF could also be coaxed back into normal behavior when they were given TNF inhibitors, suggesting that there may be hope on the horizon for effectively targeting the brain chemistry causes of depression.

Is there a blood test for depression?
'Gloomy Sunday:' The Song Linked to More Than 100 Suicides
What is depression?