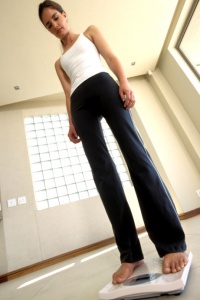 Eating disorders aren't just about body weight. They also have to do with feelings and self-expression.
Pixland/Thinkstock

Eating disorders are devastating mental illnesses that affect more than 7 million American women. Ninety percent of the people who suffer from the eating disorders anorexia nervosa and bulimia nervosa are women, according to the National Association of Anorexia Nervosa and Associated Disorders. Although they revolve around eating and body weight, eating disorders aren't about food, but about feelings and self-expression. Women with eating disorders use food and dieting as ways of coping with life's stresses. For some, food becomes a source of comfort and nurturing, or a way to control or release stress. For others, losing weight is a way to gain the approval of friends and family. Eating disorders are not diets, signs of personal weakness or problems that will go away without treatment.

Eating disorders occur in all socioeconomic and ethnic groups. Eating problems usually develop in girls between age 12 and 25. Age 17 is the average age that an eating disorder develops, and between five percent and 10 percent of young people have eating disorders. Because of the shame associated with this complex illness, many women don't seek treatment or get help until years later. Eating disorders also occur in older women and in men, but much less frequently.

Typically, women with eating disorders are described as having low self-esteem and feeling helpless and inadequate. There are several categories of eating disorders, including anorexia nervosa, bulimia nervosa and eating disorders not otherwise specified (EDNOS). All are considered psychiatric disorders.

Anorexia nervosa is a disorder in which preoccupation with dieting and thinness leads to excessive weight loss. If you suffer from this disease, you may not acknowledge that weight loss or restricted eating is a problem, and you may "feel fat" even when emaciated. Women with anorexia nervosa intentionally starve themselves or exercise excessively in a relentless pursuit to be thin, losing from 15 to 60 percent of their normal body weight. Half of all women suffering from anorexia nervosa never fully regain their health. A third remain chronically ill. About half of women with anorexia also suffer from bulimia.

Women with bulimia nervosa regularly and sometimes secretly binge on large quantities of food — up to 20,000 calories at one time — then feel intense feelings of guilt or shame and try to compensate by getting rid of the excess calories. Some purge by inducing vomiting, abusing laxatives and diuretics, or by taking enemas. Others fast or exercise to extremes. If you suffer from this disease, you feel out of control and recognize that your behavior is not normal but often deny to others that you have a problem. Women with bulimia can be any weight and often experience weight fluctuations. Bulimia is especially prevalent on college campuses where as many as 80 percent of female students have reportedly binged and purged at one time or another.

Although it has become synonymous with eating disorders, anorexia is relatively rare, affecting less than 1 percent of adolescent women. Another 2 to 3 percent develop bulimia. Yet statistics don't tell the whole story. Many more women, who don't necessarily meet all the criteria for an eating disorder, are preoccupied with their bodies and caught up in destructive patterns of dieting and overeating that can seriously affect their health and well-being.

No Single Cause of Eating Disorders

There is no single cause of eating disorders. Biological, social and psychological factors all play a role. Evidence suggesting a genetic predisposition shows that anorexia may be more common between sisters and in identical twins. Other research points to hormonal disturbances and to an imbalance of neurotransmitters, which are chemicals in the brain that, among other things, regulate mood and appetite.

In most women, an event or series of events triggers the eating disorder and allows it to take root and thrive. Triggers can be as subtle as a degrading comment or as devastating as rape or incest. Times of transition, such as divorce, marriage or starting college, can also provoke eating problems. Parents who are preoccupied with eating and overly concerned about or critical of a daughter's weight and coaches who relentlessly insist on weigh-ins or a certain body image from their athletes may also encourage an eating disorder. So can the pressure of living in a culture where self-worth is equated with unattainable standards of slimness and beauty. Our society's "ideal" body size for a woman has decreased, and the difference between the size of the average American woman and the size many women think they should be has grown tremendously. Twenty years ago, for example, the average fashion model weighed 8 percent less than the average woman; today's models weigh 23 percent less.