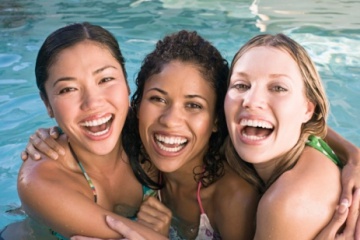 Helping young women learn to resolve problems in healthier ways than by manipulating their meals and weight is the goal of eating disorders screening and prevention programs on campuses across the country. Even so, according to the U.S. Department of Health Task Force on Eating Disorders, prevention efforts aimed at teenage girls may come too late. It's enormously difficult to change body image attitudes and unhealthy eating patterns once they are formed. Primary prevention needs to take place early, before girls learn to feel bad about their bodies.

How you perceive your body is only one component of a complete self-image, but too often it becomes the sole factor in determining self-esteem. When "how-I-look" becomes more important than "who-I-am," the groundwork is laid for crippling and life-threatening eating disorders. Parents can do a lot to prevent that from happening, beginning with examining attitudes about their own bodies and by fostering a healthy, positive body image in their children. Take these steps, even with young girls, to discourage unhealthy behaviors:

Researchers are studying the role of gonadal steroids and their relevance to eating disorders. The connection is suggested by evidence that girls and women are at much higher risk for these disorders; that the disorders tend to emerge at puberty or soon after; and that there is increased risk for eating disorders among girls with early onset of menstruation.

Research on interrupting the binge-eating cycle has shown that once a structured pattern of eating is established, the person experiences less hunger, less deprivation and a reduction in negative feelings about food and eating. The two factors that increase the likelihood of bingeing — hunger and negative feelings — are reduced, which decreases the frequency of binges.

Scientists continue to investigate the effectiveness of psychosocial interventions, medications and the combination of these treatments with the goal of improving outcomes for people with eating disorders.

Researchers are searching for genes that confer susceptibility to eating disorders. Scientists suspect that multiple genes may interact with environmental and other factors to increase the risk of developing these illnesses. Identification of these genes will permit the development of improved treatments.

Scientists at the Harvard Eating Disorders Center (HEDC) are investigating a possible link between mitral valve prolapse and anorexia nervosa. HEDC is also involved in a multicenter trial investigating the use of the drug fluoxetine in bulimia relapse prevention.