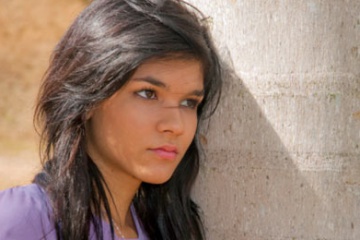 Eating disorders in young girls and teens can develop from an unhappiness with self image.
©iStockphoto/Thinkstock

Teenage girls are increasingly expressing dissatisfaction with their bodies. This dissatisfaction has been linked to teen eating disorders. Discussing the factors behind eating disorders and teens, or discussing ways to tell if a teen has an eating disorder, can lead to teen eating disorder prevention. In one teen study that addressed body image, nearly two-thirds of 548 girls surveyed, ranging from fifth to 12th grade, said that they thought that they needed to lose weight. However, only 29 percent were considered medically overweight. The study's authors suggested the media, particularly magazines and television, were having negative effects on girls' self images about their bodies.

Eating disorders often are the result, in part, of continuous pursuit of thinness and unhappiness about the way you look. However, an eating disorder is different from just feeling fat when you aren't. It is a devastating mental illness in which girls become so preoccupied with their weight and body image they jeopardize their health.

Bulimia is a disorder in which a person eats large amounts of food then forces vomiting or uses laxatives or does something else (diuretics, exercise, etc) to prevent weight gain. This is often referred to as bingeing and purging.

A girl with bulimia typically is of average weight or slightly overweight. Another eating disorder among teenage girls is called anorexia nervosa. With this disorder, the sufferer is intensely fearful of looking fat. So, she usually avoids food completely and loses weight excessively, but she denies she has a problem or is too thin. She may also binge and purge in a cycle similar to that of bulimia. She often stops menstruating, a classic sign of anorexia. Other eating disorders include binge eating disorder (bingeing without purging), which contributes to up to 25 percent of cases of obesity) and eating disorder not otherwise specified (a.k.a., atypical eating disorders that don't meet all diagnostic criteria for anorexia, bulimia, or binge eating disorder). Additionally, obesity is affecting young people at alarmingly increasing rates and, along with smoking, is a leading contributor to morbidity and mortality among adults. And although the popular press paints eating disorders as affecting only girls, they can also affect boys, with the same devastating consequences.

Again, like many of the other topics discussed in this article, if you or anyone you know has either condition, seek help from your health care professional.

How Stuttering Works
10 Tips for Better Sleep
What is landsickness?