Expectations Color the Ethics of the Powerful, for Good and Bad

by Robert Lamb May 6, 2016
We always seem to be testing out whether power corrupts. But the good news, according to one new study, is that it may not, so long as people set expectations about ethical behavior beforehand for those in power. Adrianna Williams/Getty Images

Does power corrupt a person? The myriad of fallen politicians, cult leaders, CEOs, FIFA officials, yogis, celebrities and hobbits suggests that it certainly can.

Numerous studies have put the old adage to the test, thankfully balancing the grim, corruptive reality with such silver-linings observations as "power doesn't corrupt; it heightens pre-existing ethical tendencies" and "where corruption is stigmatized, women will be less tolerant of corruption and less likely to engage in it compared to men."

Now a new study joins the heap of peer-reviewed literature that kinda, sorta makes us feel better about the soul-warping qualities of power. Published in the journal Personality and Social Psychology Bulletin, the paper explores how prescriptive expectations can keep corruption-prone power-wielders on the straight and narrow.

The trio of authors from the University of Hawai'i at Manoa, Northwestern and Columbia conducted a series of experiments to study the effects of descriptive expectations (such as "powerful people often behave unethically") and prescriptive expectations (such as "powerful people should behave more ethically") on moral behavior. In other words, they set out to see if ideals about power can trump our ripped-from-the-headlines experience of corruption.

They found that, yes, when presented with descriptive expectations, power-granted people tended to join the dark side. When in Rome, right? However, when primed with prescriptive ideals about higher standards of ethical behavior, test subjects expressed more ethical intentions and were less likely to cheat on a dice game for a $50 gift card. Granted, the stakes are a lot higher where presidencies and thrones are concerned, but $50 goes a long way for college students participating in a psychology study.

The take-home here, according to the researchers, is that the responsibility falls to the power-granting organization — be it a utopian cult or a nation-state — to stress the ethical expectations of power and hope that message resounds with the self-expectations of powerful people.

To grant a person power is to send her on a tightrope walk across a chasm of corruption. Hopefully she'll have an inborn sense of balance, but you should probably give her one of those balance poles as well.

What's Up With Captain America's Shield? 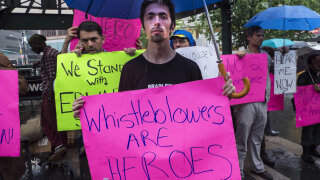 10 Whistleblowers and the Horrors They Exposed