5 Tips for Making it Through Your Company Holiday Party 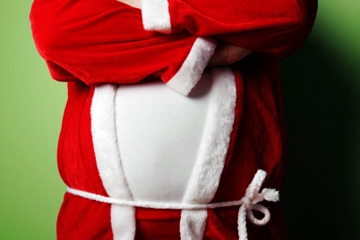 Even Santa is guilty of bingeing on cookies during the holidays.
iStockphoto.com/fotolE

Everyone has a story about a holiday party gone awry or a co-worker that's been, um, over-served. Don't be that employee! Here are some important factors to consider when celebrating the holidays with your co-workers. Even just the change of environment can lend itself to some risky choices. The clothes you wear, how much you drink and the subjects you talk about are among some of the things that are important to keep in mind.

For pointers on how to get through your corporate holiday party, problem-free, read on! And be sure to tell us some of the tips you've picked up through your own experiences.

Some good, basic pointers: Stick with the soft stuff, have a glass of water between each drink and never drink and drive. Even if you’re just nursing a couple drinks – remember, what your bosses and peers think about your display tonight will affect your every move come Monday.

It seems like the most obvious answer of all, but nonetheless, people still get it wrong from time to time. At a company party, the number one thing to keep in mind is to pace yourself. Not a drinker? Start off with sparkling water. If you’re self-conscious that it looks like you’re not holding a drink, ask the bartender to add a little fruit to your glass – even just a lemon or lime slice and your peers won’t know the difference between a sparkling water and a gin and tonic.

For those of who can throw liquor back – it’s unwise to push your limits. Stick to two -- max three -- drinks throughout the whole night and try to follow the one drink per hour rule. Trying to drink your team under the table may lead to a demotion, not a promotion.

Food is always less of a concern than alcohol, but still something important to consider. If you’re a big spiller – try to avoid dark-colored foods and red wine, and remember to wear something dark (black is always appropriate when done well).

Try to choose foods that you can eat while engaged in a conversation – nobody wants to look at you with nachos falling out of your mouth.

Remember what your mother taught you – chew with your mouth closed, swallow, then talk. There’s no other order when you’re around your colleagues.

Keep it simple, keep it classy and be absolutely positive that your outfit is work appropriate. If you want to be festive, wear a red sweater or a pretty chunky necklace. But don’t overdo it – this isn't prom and it definitely isn't your wedding day. You want your colleagues to appreciate your style and it’s always nice to show off a piece of clothing you can’t wear into the office, but remember you’re an employee first and a fashionista second.

Be sure that your skirt is always long enough (no more than an inch or so above your knee), be comfortable in what you’re wearing and be ready to move. If you’re full-chested or curvy, make sure you can kneel, sit down or move around if need be without exposing anything that would make your grandmother blush. For men, it’s important to dress to the occasion – if everyone else is wearing slacks, don’t get caught being the only guy in jeans!

Much like What Not to Say at the Thanksgiving Table, there are plenty of subjects that shouldn't be touched when gathering with co-workers outside of the office. Try to avoid the big three – money, sex and politics. If you aren't confident your co-worker is still with their wife – do not bring her up. If a young girl in the office is dressed inappropriately – say hello and move on. Don’t get caught in a situation that could have people talking about how awkward you were, but don’t be afraid to talk about something other than work, too.

So, that said, what are some good topic areas to bring up at a work function? If you know a co-worker is a big fan of football or another sport, try to work that into the conversation in a tasteful way. Be wary of “Oh, you’re a Red Sox fan? Well I’m from New York!” and instead steer the conversation towards positive energy. “Hey Bill, it looks like your team is having a pretty great season. You think we could be seeing them in the Super Bowl?”

Other great topic areas are any subject that is a passion of your co-worker. For example, if you know that Suzie loves to cook, tell her about a great meal you made recently. If Joe is a big reader, try to bring up books. Try to show up to the party with some talking points on hand to avoid getting stuck talking about the weather for four hours.

We all know how much it sucks to be the first one to walk in the door, but it definitely gives a much worse impression to show up late. Try to be prompt with work parties – they aren't as casual as some of your other functions as they deal with co-workers and not just peers. Also be conscious of the host – if your boss’s wife planned the whole event, be sure to thank her for her graciousness before leaving.

Never leave before the food is served, and wait at least an hour after. If the event isn't catered, offer to help clean up. Be sure to put in a sufficient amount of time and seem genuinely interested in being there before you take off. We all have lives, that’s obvious, but it’s important to prioritize the people you work with and to make them feel a part of your life as well.