by Alia Hoyt Jun 8, 2016
Lions, and dolphins and bears, oh my? A new book says that knowing which chronotype you belong to will let you know the best time to do anything. Hynci/Kojihirano/Bazilfoto/PrinPrince/Paket/Anankkmi/GlobalP/DrPAS/Thinkstock

If you're looking for a pay raise, reduced belly fat or a better sex life — and really, who isn't? — discovering your chronotype could be key to all types of success. A chronotype is the genetically pre-determined classification of a person's particular bio-time. You probably know the concept better as the long-held notions of "early birds," "night owls," and slightly newer "hummingbirds," (those in-between folks who keep regular hours).

An upcoming book "The Power of When," due out September 6 from sleep psychologist Michael Breus, Ph.D., explains how understanding and living according to your personal daily biological clock or schedule, which is influenced by hormones, enzymes and circulatory activity, can help you live as optimally as possible. "Being out of sync with bio-time is devastating to one's physical, mental and emotional wellbeing," writes Breus in his upcoming book.

After analyzing more than 200 sleep-related research studies, Breus developed daily schedules suited to each chronotype and modernized the categories into mammals, rather than feathered friends. Here's the breakdown:

Bears (50 percent) – cautious, extroverted and open-minded; they wake up in a daze, get tired in the mid to late evening and sleep deeply at night; society's current schedule was created to suit this group

Wolves (15-20 percent) – impulsive, moody and creative; risk-takers who enjoy pleasure-seeking behaviors; they're on the late shift — groggy before midday but awake after midnight

Once you know your chronotype, you can adopt all or part of Breus's general schedule, which offers the best time to wake, go to sleep, eat, snack, exercise, compete in a team sport, go for a run, take medications and even fight with a partner.

Some of the book's recommendations based on sleep research are pretty surprising. For example:

Drinking coffee first thing in the morning is pointless, and people should save a caffeine boost for when cortisol levels dip. Bears, for example, experience this drop from 9:30 – 11:30 a.m., then again from 1:30 – 5:30 p.m.

If you're planning a "cheat" meal, look no further than breakfast. The best time to pig out and metabolize food more efficiently is in the morning (dolphins at 10 a.m., bears and wolves at 8 a.m.). Lions are an exception — they should pig out at 2 p.m. when they experience an afternoon energy crash.

Friday is the day to ask for a raise because it's less hectic and everyone's happy about the coming weekend. You and your boss's chronotypes are equally important because you want to do the asking when you're at your peak confidence/pleasantness and he/she's most receptive. The book contains a chart to cross-reference times (for example, a dolphin should ask a bear boss for a salary hike at 5 p.m.)

The ideal time for sex is trickier because it involves two people, sometimes with conflicting chronotypes. Ironically, 50 percent of lovin' occurs between 11 p.m. and 1 a.m., which is the worst possible time frame thanks to the human body's physiological tendency to slow down. The book contains charts that match up partners by chronotype and gender, then gives prime options per pair. For example, a male lion and a female bear would find the ideal times for sexual encounters to be 9 p.m. or 7 a.m., but two female bears should shoot for 7:30 p.m. for the best experience.

Breus got the idea for the book from working with his own patients with insomnia issues. He had long treated them using standard methods, like melatonin supplements, sleep diaries and light therapy, sometimes to mixed results. "These people in many cases were wolves," he says in an interview. So they didn't respond well to those treatments as they were trying to force their bodies to adapt to a different chronotype schedule. He encouraged them to make slight changes to their daily schedules that were closer to their natural bio-times. They reported "remarkable improvement" to many areas of life, including sleep quality, fitness, mood and general health.

"Your chronotype is genetically predetermined," he says. "You can shift if you need to [for instance for work], but it's hard to fool Mother Nature. For a lot of patients who are wolves, I'm having a meeting with them and their boss [and saying], 'If you really want to get everything you can out of this employee, give them some flexible hours and they're going to produce for you in incredible ways.' You'd be shocked at how many bosses relate to it."

Now That's Cool
Do you identify with restless dolphins or enjoy hibernating like a bear? Take The Power of When Quiz to find out which category you fall into. Stay tuned for my report where I try out his recommendations and see whether these changes improve my life!

Alexander Camelton, the Baby Camel Taking the Internet by Storm

I Used My Chronotype Info to Revamp My Life: Here's What Happened 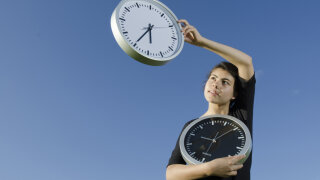 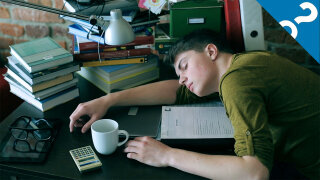 What the Stuff?!: 5 Weird Facts About Biological Rhythms