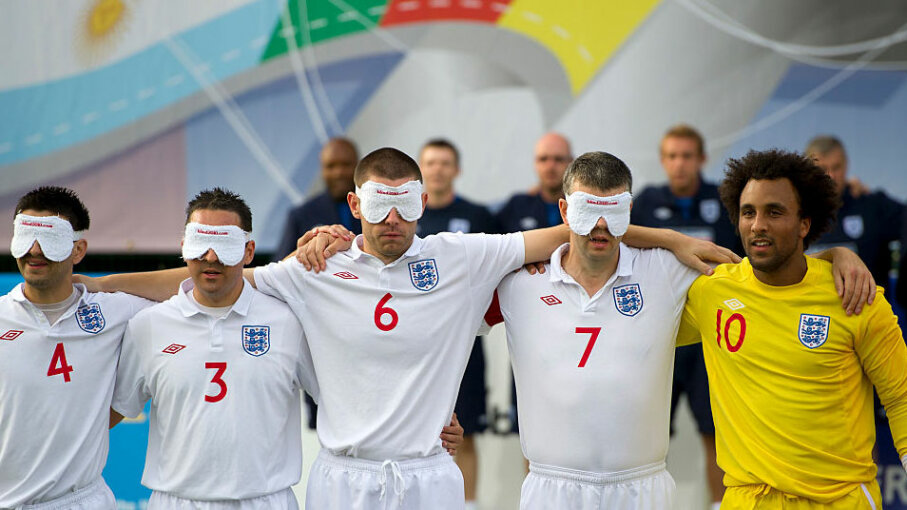 England's blind football team poses for a photo at the 2010 IBSA World Blind Football Championship in England. Rules dictate that the visually impaired players must wear blindfolds but the goalkeeper may be sighted. AMA/Corbis via Getty Images

Unless you have the staunchest of poker faces, facial expressions are pretty tough to keep under wraps. A visible grimace when embarrassed or uncomfortable. A jubilant smile that reaches all the way to the crinkles of the eyes. Utter disbelief or anger when something ridiculous happens. These are all common and identifiable reactions that remain fairly consistent in presentation across most societies. But do we learn them from watching others or are these expressions innate?

A group of University of Geneva (UNIGE) researchers examined an existing body of 21 research studies published between 1932 and 2015 to find out, publishing their findings in the journal Psychonomic Bulletin & Review. They reviewed studies involving participants who were born blind, and thus unable to model their own reactions after others, making them uniquely qualified for this exercise.

Each study wasn't necessarily working from the same hypothesis, however. Some compared the expressions of blind and sighted babies, whereas others tried to elicit reactions on demand from blind participants. Still others noted the similar facial expressions of Paralympic Games athletes (both sighted and blind) who'd finished in second place, just shy of the desired win.

These images show the facial expressions produced by blind athletes (left) and sighted athletes (right). The expressions are the same for both groups when produced spontaneously, but differ "on demand."
Bob Willingham

In their review, the UNIGE group reached some significant conclusions about emotion and facial expressions. "Older as well as recent studies that have examined the production of facial expressions by blind individuals reported that visual learning seems to not be necessary in order to produce the same pattern of facial expressions in real emotional contexts," explains researcher Edouard Gentaz in an email interview. "The fact that persons born blind can produce facial expressions similar to those of sighted people may be evidence that it is innate and universal, and not just dependent on social learning by imitation."

That's interesting, but did you catch Gentaz's use of the word "real"? It seems that the authenticity of a situation matters in the production of true reactions. Some of the studies looked at voluntary, or "on-demand" expressions, and experts found that blind subject have a difficult time producing expressions when solicited, as well as controlling the degree of intensity. This causes experts to believe that sight plays a more significant role in these types of expressions.

"Sighted children have multiple opportunities to train themselves to express their emotions, for instance in front of a mirror. They learn to modulate their expressions according to the results they seek," Gentaz explains. "It follows that sighted people develop a structure for expressing their emotions that the blind, deprived of these training opportunities, cannot easily acquire; hence their difficulties in correctly proportioning on demand the intensity of an emotion."

"In voluntary contexts [blind people] can also reproduce the same expressive pattern as sighted subjects (move the same facial muscles)," adds researcher Dannyelle Valente, via email. The difference is in the intensity and control of emotions. "Blind individuals seem to conform less to the 'display rules' linked with visual feedbacks to determine in which situations which emotions can be expressed [and how to] control their intensity on demand. Display rules are dictated by norms and social and cultural pressures that can affect facial expressiveness in different ways," she says.

Next, the researchers hope to examine how other senses, like touch and hearing, factor into expression of emotions. They note that sight is important not only for expressing one's own emotional state, but also for perceiving the emotions of others.

"We are working on how to replace sight with other means of communicating emotional states, in particular by using the other senses. This entails making sure that blind people have access to emotional codes in the form of models or drawings they can touch," says Valente. "In fact, being able to touch their own face is a tremendous advantage for the learning process. Blind people can enhance their own perceptions as well as learn how to manage the intensity of the expression of their emotions."

Now That's Cool
Certain animals have an impressive range of facial expressions. Cats have 21, if you include their whisker and ear twitches; horses have 17 and dogs have 16. By comparison, humans have 27 facial expression variations, known clinically as "defined Action Units."