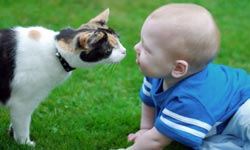 What are you after, cat? (Hint: not the baby's air supply.)
©iStockphoto.com/AnthonyRosenberg

Cats have been seen alternately as divine (the Egyptian goddess Bastet took a feline form) or evil (we all know black cats bring bad luck, right?). If the myth that cats steal sleeping babies' breath were true, it would definitely fit in with that darker image.

However, no scientific study or verifiable accounts back up such stories. Cats do crave softness and warmth. It's an instinct that keeps them close to the safety of their mothers as kittens. And some people suggest that the smell of milk on a baby's breath might further draw a cat toward the infant's mouth, resulting in accidental suffocation. However, many cats are indifferent to milk after they're weaned. Most adult cats, in fact, are lactose intolerant -- which won't stop all cats from accepting dairy treats, but should give you second thoughts about offering them.

Cats' supposedly murderous ways have also been blamed on feline feelings of sibling rivalry: Kitty resents all the attention lavished on a new baby. It's true that cats can be disturbed by major disruptions to their lives, but they usually act out by urine marking -- spraying or urinating outside the litter box -- or becoming more vocal, not by plotting revenge.

How did this myth start? It's possible that cats have inadvertently contributed to Sudden Infant Death Syndrome, or SIDS, in which an infant dies while sleeping for no known reason. Infants with respiratory conditions or an underdeveloped wake-response reflex are known to be at greater risk of SIDS. If such a child rolled toward a cat in his sleep, or if a cat stretched a paw on the baby's face, it might impair breathing enough to cause death. Then again, the cat's presence may have been pure coincidence.