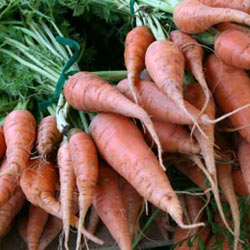 During WWII, Britain's Ministry of Food encouraged people to be creative with their carrots, which may have let to carrot cake's popularity in the 1950s and beyond. (We're sure that the rich cream cheese frosting that has since become its typical topping has nothing to do with it.)
©iStockphoto.com/Stieglitz

To the relief of eyeglass makers and their stockholders everywhere, eating carrots does not correct defective vision -- unless the vision problem is caused by a vitamin A deficiency. Vitamin A is essential to eye health. It's incorporated into the eye's photoreceptor cells, which capture light and allow you to see.

The human body can't produce Vitamin A. It must come from our diet, where it's available ready-made in meats, fish and especially liver. Although carrots don't supply vitamin A, they do contain a do-it-yourself version called beta-carotene. Beta-carotene is a chemical compound that gives a variety of vegetables their colorful hues, including leafy greens, orange squashes and red and yellow peppers. It's also a provitamin, from which the body synthesizes vitamin A.

With beta-carotene abundant in so many foods, how did carrots come to be named the miracle worker? In World War II, the British military wanted to explain their fighter pilots' remarkable success in shooting down German aircraft on nighttime raids. Coincidentally, the country had a bumper crop of carrots, which patriotic citizens planted in home gardens to increase domestic food supplies. Thus carrots became the Royal Air Force's secret weapon against German bombers. Wartime posters claimed that carrots "help you see in the blackout," referring to air raids, when cities went dark to avoid giving away strategic targets. Whether the propagandists knew it or not, German medical lore held the same belief.

The real reason for the Air Force's success? The military had developed an advanced system of airborne radar to detect enemy planes in the dark.