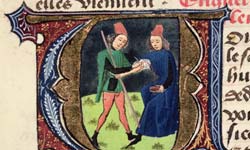 If you think waiting for hours in a small examination room for a doctor is a frustrating experience, imagine waiting for your doctor to check his astrological charts to determine when he could schedule your next bloodletting.

Based partly on an ancient Greek belief that all forms of sickness were results of imbalances in the humors (phlegm, yellow bile, black bile and blood), bloodletting has been the quackery of choice for more than 2,500 years. To make it in the quackery business as long as bloodletting did, you have to make bold statements about curing sickness -- and occasionally change the explanation of how the cure works. Bloodletting, according to different proponents through the ages, allows your blood to breathe, pleases Jesus and Yahweh, removes demons and works in relation to the constellations in the sky.

When monks and priests got out of the bloodletting business, barbers stepped in, willing to take an inch off the top and the foot off at the ankle. Trained doctors in that time didn't practice surgery, and only took up the practice once there was a reestablishment of independent roles for the barber and the surgeon. (Barbers kept the red-and-white pole in the breakup, however.)

When the first president of the United States, George Washington, fell ill in late 1799, he had more than half his blood removed in the course of 10 hours, certainly bringing about a speedier demise [source: Vadakan]. Falling out of favor by the 1850s, bloodletting was still practiced in the United States into the 1920s [source: Starr].