by Jesslyn Shields Jul 27, 2016
Though most humans do best in groups of around 150 people, those with the highest IQs break from the mold. Calaimage/Martin Barraud/Getty Images

Picture yourself an early hominid on the African savanna during the Pleistocene Epoch. You probably spend most of your time finding food, keeping out of the way of sabre-toothed tigers, chilling with your pals, drying your socks. You most likely live in a group of around 150 buddies — enough to feel cozy and supported, but not too big complicate group decision-making. You may or not be happy, but a new study suggests that this prehistoric environment hardwired in us a preference for these specific social conditions. Those of us who prefer something different might just be smarter than everybody else.

Thus, it has been foretold by our chromosomes that the more time humans spend with those closest to us, the happier we are. And that 150 number is actually really important — we see it everywhere: it's the population of most modern hunter-gather groups, it's the typical size of an Amish community, it's the number of individuals on the average Christmas card list. We can happily socialize within a network of around 150-200 people, but if our network gets much bigger, we get bummed.

But it seems people with high IQs are the exception to this rule. Research psychologists at Singapore Management University and the London School of Economics looked at the IQ scores, population density where the participants lived, and overall life-satisfaction data reported by more than 15,000 American 18-to-28-year-olds in 2001 and 2002. They found that most people who lived in sparsely populated areas reported being happier — especially if they lived near their family or hometown. This was especially true for less intelligent people; those with higher intelligence were less satisfied with their lives under these conditions, and reported higher life satisfaction in an urban area.

The research team also looked at how much each participant socialized and compared that data against participant IQ scores. They found those with higher intelligence were generally happier alone than in a posse, probably for the same reason they were happier living in a more urban area than those with lower IQs: they are more likely to be able to adapt to places and situations that would make your average Homo erectus uncomfortable.

The savanna theory of happiness suggests that our brains evolved to reward us for living in conditions as similar to a Pleistocene savanna as possible, but that individuals with higher intellects prefer to experiment with novel experiences, whether that's city living or solitude. As one of the same authors found in a 2004 study — basically, that the super-smart aren't as bothered by a variation from the norm like groups much larger than or much smaller than optimal 150 — it shows in the personal preferences of the smartypants that walk among us.

But whether you're a city mouse or a country mouse, a social butterfly or a lone wolf, do what makes you happy.

Now That's Interesting
Not only do highly intelligent people like to experiment, they’re more likely to suffer from a mental illness. For instance, bipolar disorder is four times more common in those who earned straight A’s in school.

One Time This Pony Drank a Lot of Diet Coke. Here's Why 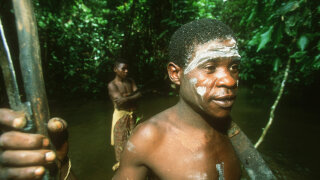 Did human intelligence peak thousands of years ago?

BrainStuff: How Crowds Can Kill You [VIDEO]

Early Humans Mated With Inbred Neanderthals — at a Cost