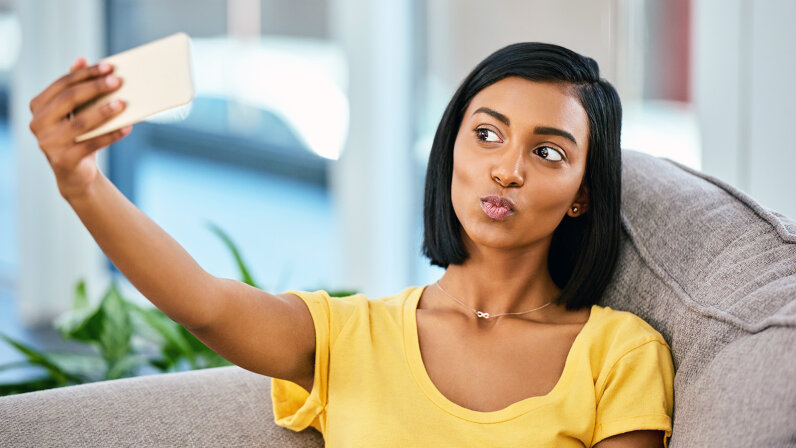 Snapchat filters have altered our perception of beauty, so much so that many people are seeking plastic surgery to get that filtered selfie look — permanently. PeopleImages

It's a decision we all must make when it comes time to take a selfie: To duck face or not to duck face? That is the question. (Duck face, in case you are a blissful being who is unaware of social media norms, is a pose where you stick out your lips, like a duck bill, and strike a dramatic pose.) But would you want duck face all the time? Like, in your real life?

The answer, say researchers at the Boston Medial Center, is maybe so. OK, hopefully no one is asking plastic surgeons for duck face. But people are definitely asking those docs for improvements to their appearance, so they look better in selfies. And not just that — they want to look like they do in those selfies once all those photo filters are applied.

The BMC researcher's findings were published in the Aug. 2, 2018, issue of JAMA Facial Plastic Surgery, where they noted that our perceptions of beauty are changing thanks to image-oriented social medial platforms like Snapchat and Instagram. As we become more accustomed to seeing filtered skin and digitally altered faces and hair, we start to think it looks pretty great. And it does. But it's also triggering body dysmorphic disorder (BDD) in some people, who then ask plastic surgeons to make their real-world selves look as unattainably great as their digital selves.

This is leading to what researchers are calling "Snapchat dysmorphia," Neelam Vashi, director of the Ethnic Skin Center at BMC, said in a press release. "Filtered selfies can make people lose touch with reality, creating the expectation that we are supposed to look perfectly primped all the time. This can be especially harmful for teens and those with BDD, and it is important for providers to understand the implications of social media on body image to better treat and counsel our patients."

The researchers advise against performing surgery on anyone with this type of body dysmorphic disorder because, fixing the outside problem won't cure the underlying psychological issue. It could, in fact, exacerbate it.

BDD is on the obsessive-compulsive spectrum, and it affects about 2 percent of the U.S. population, including about 2.5 percent of males and 2.2 percent of females. Studies have shown that teen girls who altered their selfies were more concerned about the way their bodies look, and they were more likely to overestimate their weight. It doesn't help that people who are affected by BDD are also likely to seek validation on social media.

The good news is that no one is asking for permanent duck face or to have puppy ears or kitty whiskers surgically added to their faces. But maybe we could all use a bit more #wokeuplikethis or #nomakeup #nofilter in our feeds.

NOW THAT'S INTERESTING
Let's not put all the blame on apps and filters here. The cameras on our phones carry a lot of responsibility for weird-looking selfies too. Because we're taking the picture at arm's length, which is still pretty close to the lens, it can distort our faces, making our noses look bigger and ears look smaller. Not cute.