If you're a fan of superhero stories, then you're probably used to suspending disbelief a little bit. Who doesn't secretly hope there's a guy trading his everyday clothes for a cape in an elevator and then flying around somewhere foiling bad guys three at a time?

For some of us, it may actually be the more mundane plot points that are toughest to swallow. Like, why is it that Superman can hide in plain sight by simply shedding his costume, throwing on a pair of glasses and running a comb through his hair? A recent study out of the United Kingdom offers an answer.

Researchers at the University of York found that a person can make his or her face more difficult to recognize with some minor tweaks, like donning a pair of spectacles. They came to that conclusion through a study in which the researchers showed participants two photos at the same time and asked participants to determine whether the same person was in each photo. The subjects were wearing glasses in both photos in one round and then both were without specs in another. Finally, participants also saw a pair of photos in which one subject was wearing glasses in one picture but not in the other.

The researchers found that participants had a significantly more difficult time deciphering the mixed pairs. They correctly matched pairs about 80 percent of the time in instances in which both subjects wore glasses. That number plummeted by 6 percent in cases where only one face wore glasses.

The study could make it easier for Superman fans to understand how Clark Kent has passed as a mild-mannered journalist all these years. It also may have some practical significance in real life. That includes giving cops, lawyers and judges a better understanding of facial recognition issues in police lineups and courtroom settings.

Now That's Interesting
The Superman character was originally conceived by a pair of high school students in Cleveland, Ohio, who self-published an animated story about a flying superhero in 1933.

Could Your Tattoos Camouflage Skin Cancer? 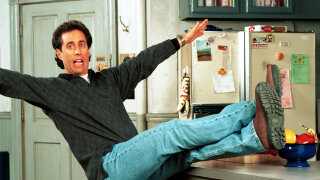 Is Superman mentioned in every 'Seinfeld' episode?

The Batman vs. Superman Quiz