Which Country Is the Most Empathetic? (Hint: It's Not the U.S.)

by Karen Kirkpatrick Oct 24, 2016
A new survey is the first of its kind to rank countries on empathy. Dirtydog_Creative/Getty Images

How likely are you to help out a complete stranger or to see things from the point of view of someone with different political  beliefs? And could your willingness to do that depend on which country you live in?

A new study out of Michigan State University (MSU) is the first worldwide look at empathy, which the researchers define as the tendency to be in tune with the feelings and perspectives of another.

The researchers examined online surveys from 104,000 adults in 63 countries. Participants completed a test widely used to measure empathy, which asked them to use a scale of 1 to 5 to determine how much they felt statements they read described them, for instance: "I sometimes try to understand my friends better by imagining how things look from their perspective."

So how did the world do? Ecuador topped the list of most empathetic countries, followed in order by:

Lithuania came in 63rd, with other Eastern European countries clustered near the bottom.  (Countries with few participants were excluded from the study; that included most African nations.)

The results may seem surprising to some, but perhaps they shouldn't be. One reason cultures may vary on empathy is that some emphasize individualism while others emphasize collectivism, the study authors note. People in collectivist cultures tend to be more empathetic than people in individualistic cultures.

"Individualistic cultures tend to focus on individual achievement and autonomy -- we're sort of the masters of our destiny," says William Chopik, the lead author of the study, and an assistant professor of psychology at MSU. "Whereas collectivist cultures are much more embedded in social networks. These people stress the importance of family, existing friendships. They're often wary of drawing too much attention to themselves because that would show you as an individual and collectivist cultures don't value that."

Countries in dark red have high empathy, while countries in light pink have low empathy. The countries in gray were not studied due to small sample sizes.
Michigan State University

He was initially surprised the U.S. came near the top. "A lot of people think people in the U.S. struggle to form close relationships ... But when you think about it more broadly, the U.S. is actually a pretty generous country. They give aid to different countries; they're always looking out for human rights violations. Compared to the rest of the world, they're pretty vigilant on those kinds of things."

As for the Middle Eastern countries, which Americans may not see as especially empathetic, he suggests that the survey itself may be responsible for the cluster of those countries in the top 10, because it didn't differentiate in any way between empathy for people in one's own culture versus people from other cultures. "When you talk to people from the region, they're very warm, especially to the people from their in-group," he says. "That's one thing we're interested in for future research."

This information is all well and good, but what does it mean to be an empathetic nation and is it important? Chopik says that it is, because empathy is an indicator of generosity of spirit, happiness, even physical health and well-being.

"Really empathetic people are happy," he says. "When I think about well-being and what makes a great quality of life, oftentimes it's happiness and our social relationships. And empathy is a way that links those two things. There's even some research on generosity and health, as well. When you look at the well-being of countries, you often think about how they form relationships, are they happy, and a lot of that might come down to empathy."

That doesn't mean that people in the countries at the bottom of the list should be concerned about their quality of life or well-being, Chopik says. The differences between countries are actually pretty small. "Most countries are very empathetic. It's not like this country has zero empathy or they can't take another person's perspective at all."

In fact, just a tenth of a point can mean the difference of a dozen or more places in the rankings. And that's good, he says. "One takeaway [from this study] is that the world is an empathetic place, and I think that's a positive thing."

Now That’s Interesting
If empathy is related to happiness, then are the people of Ecuador the happiest people, too? Not so fast. A recent study shows that the happiest people are found in some of the coldest countries, with Denmark coming in at No. 1.

Ridiculous History: How an Irish Beer Became the Authority on World Records

The Odd Empathy of Vicarious Embarrassment 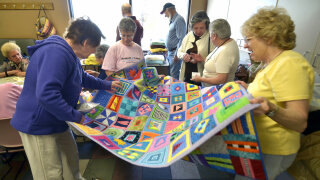