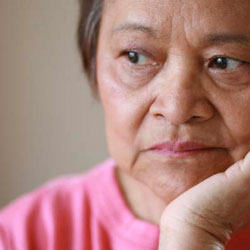 DID is an extreme form of mental illness characterized by two or more separate personalities in one person. See more mental disorder pictures.
Photo courtesy of SAMHSA

Most of us have days when we don't feel like ourselves. Some of us have moments, sometimes more than moments, when we feel disconnected from our surroundings, our actions, ourselves. We've arrived at work with no clear recollection of the drive from home.

Taken to its most extreme level, that's what dissociative identity disorder (DID) feels like all the time.

DID is an extreme form of mental illness. Characterized by two or more separate personalities in one person, it's the disease portrayed in "The Three Faces of Eve," "Sybil," and more recently "The United States of Tara," and it's a controversial diagnosis. Some doctors believe it occurs somewhat commonly in certain types of trauma survivors; others believe it's extremely rare, to the point of almost never occurring; and some don't believe it exists at all.

What's sure is that mental illness in general is far from rare. It can result from genetics, biology, environmental factors and/or some combination thereof. The World Health Organization estimates that 400 million people around the globe suffer from some type of mental-health problem. Compared with issues like depression, anxiety, addiction and obsessive compulsive disorder, dissociative identity disorder is a rare diagnosis, but it's out there. According to MedicineNet, 3 percent of institutionalized mental patients suffer from the condition.

This potentially debilitating disorder is one of the most misunderstood of all mental illnesses. Here, we'll look into some of the more common misconceptions about multiple personalities and find out the truth about the disease.

First up, myth 1: "It's also known as schizophrenia."