Why are people afraid of clowns? 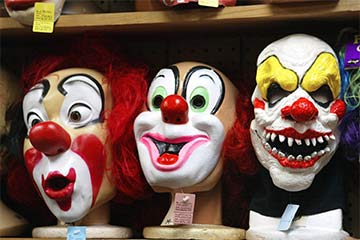 Clown masks, ranging from cheery to evil, are displayed at the Fantasy Costumes HDQ store in Chicago prior to Halloween.
Tim Boyle/Getty Images

With tufts of multicolored hair, greasepaint grins and comically large shoes, clowns are the epitome of a carefree good time. At least for some people.

Others say clowns are no laughing matter. Instead of causing mirth at birthday parties or hilarity at three-ring circuses, the feelings clowns evoke are at the other end of the spectrum. In fact, the sight of jolly buffoons performing their comedic shtick can be cause for fear and alarm.

At its most severe, this irrational fear of clowns -- known as coulrophobia -- can make people cry, scream or get angry. It also can prompt bouts of perspiration, nausea and rapid heartbeat. The fear probably stems from the uncomfortable sense of disconnect between watching a character in gleeful disguise while his true identity and emotions remain hidden [source: Briggs]. One psychologist estimated about 2 percent of adults experience coulrophobia [source: Rodriguez McRobbie].

The rate is probably higher for children. One survey of kids ages 4 to 16 discovered most of the 250 participants didn't like to view clown images, even when they were told the pictures were being considered as decoration for a hospital's children's ward. Some kids even feared the images [source: Rodriguez McRobbie].

Turns out these wary instincts are not without cause, at least from a historical perspective. While modern clowns are meant to entertain, their predecessors sported an ancient and sketchy past filled with maniacal behavior, infidelity, suicidal feats and murder.

It's a legacy so etched in our collective consciousness, it may cause the clown profession to become nearly extinct. Although professional clowning reached its peak in the early to mid-1900s, by the late 1960s, there were fewer than 200 professional circus clowns on record in the U.S. To combat these flagging numbers, Ringling Bros. and Barnum & Bailey opened a clown college in 1968. The actual school closed down in 1997, and now seminars are given throughout the U.S. for potential circus employees. However, other clown colleges exist, including the Dell'Arte International School of Physical Theatre in Blue Lake, California, and the International School of Theatre Jacques Lecoq in Paris [sources: Ringling, The Humour Foundation].

Nevertheless, the World Clown Association says membership has dropped from 3,500 in 2004 to 2,500 in 2014. Lack of interest among younger people, older clowns passing away and higher standards from employers are to blame, say association members [source: Musumeci].

But maybe it's also coulrophobia and the prevalence of the "scary clown" image that has led to slippage.

The Fear of a Clown

Most people don't have to search too far to come up with an example of a scary clown. For children of the '80s, Pennywise the clown springs to mind. Pennywise debuted in the 1986 Stephen King novel "It," which was later made into a TV miniseries. The tale depicts a clown who terrorizes and murders children, and famously hides in the city's sewers.

While the story may have spurred a generation of children to dare each other to peek through sewer grates or else refuse to go near them, this isn't where clowns got their scary start.

Clowns entertained pharaohs in ancient Egypt and rulers in imperial China. Native Americans used clowns as comic relief, allowing them to crash serious dance rituals. There are records of an early Roman clown named "Stupidus," as well as of court jesters in medieval Europe. More recently, pantomime clowns roamed France and Great Britain, while in the U.S. they moved from traveling sideshows to full-blown three-ring circus acts.

Some blame Charles Dickens for inspiring the modern iteration of the scary clown that appears in popular culture. He included a drunken clown in his 1836 book "The Pickwick Papers," then reinforced the idea in 1837 when he edited the posthumous biography of Joseph Grimaldi, a clown whose fame cut a wide swatch across London yet whose real life was besieged by depression and loss. Ironically, the clown in "Pickwick" was inspired by Grimaldi's son, a clown who died of alcoholism [source: Rodriguez McRobbie].

Along with the sad clown came the evil clown. A year before Grimaldi's ill-fated existence was immortalized in print, the life of an equally famous clown took a scary turn. In 1836, Jean-Gaspard Deburau -- whose pantomime clown character was famous throughout France -- killed a boy with his walking stick after the boy heckled him in the street. Although later acquitted, the event cemented a fearful connection between the clown known for his white face paint, red lips and black eyebrows, and the idea that the gaiety on the outside could belie a troubled soul [source: Rodriguez McRobbie].

Coulrophobia, the word used to describe a person's irrational fear of clowns, has its origins in ancient Greece. "Coulro" is the Greek word for "one who goes on stilts." Although coulrophobia is not listed by name in the Diagnostic and Statistical Manual of Mental Disorders, the fear of clowns falls under the guide's "specific phobia" category [sources: Briggs, Lewis].

Don't Send in the Clowns 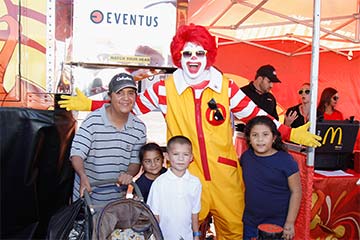 Just as clown mythos seemed to reach a scary peak in Europe, a different storyline was evolving in the U.S. As the circus became popular in late 19th-century America, clowns took a more lighthearted approach. By the time Clarabell the Clown (from "The Howdy Doody Show") and Bozo the Clown reached television audiences in the mid-1950s to early 1960s, clowns had become a symbol of innocent children's entertainment [source: Rodriguez McRobbie]. Ronald McDonald, long-time spokesclown for the McDonald's hamburger chain, got his start in the 1960s and is still going strong today.

So why would these happy images cause discomfort? Experts point out that young children may not necessarily be scared of clowns per se. Rather, they are frightened of the unusual and unknown, whatever form it takes. This is why some children are equally afraid of clowns, the Easter Bunny and Santa Claus [source: Rohrer].

For adults, the exaggerated makeup, manic behavior and unknowable emotions -- what's really going on behind the smiling mask? -- contribute to their unease [source: D'Costa].

And let's not discount the influence of pop culture. From Bart Simpson's "can't sleep, the clown will eat me" to the cult film "Night of the Demon" and the Joker character in Batman films, scary clowns have become part of the collective psyche. The fact that real-life serial killer John Wayne Gacy dressed as a clown for children's parties only helped fuel the fear.

Sure, it's pretty easy to avoid clowns in real life but if you want to get over your coulrophobia, treatment typically follows methods used for other phobias. These can range from biofeedback and anti-anxiety medication to repeated and prolonged exposure. One circus runs a program to help adults overcome their clown fear; they start by first having clients meet the clown in his regular clothes and without any makeup. Gradually they see him put on his clown costume and face paint. They also learn about the history of clowns and why they act as they do [source: Williams].

Finally, the presence of a clown can sometimes be actually therapeutic. A 2013 study in the Journal of Health Psychology found that a therapy clown's presence lessened pre-operative anxiety in children who were having minor surgery. A therapy clown has had special training in working with sick children so as to make them feel comfortable and lessen stress. Perhaps all circus clowns could benefit from this.

Author's Note: Why are people afraid of clowns?

After I read Stephen King's "It" as a teenager, I never looked at a sewer grate quite the same. It's not that clowns suddenly became scary, it's that my well-tuned imagination could fuel just about any fear -- especially when it came to the Unknowable. The book's premise that people could appear one way on the outside and have entirely different intentions on the inside has its roots in reality (John Wayne Gacy comes to mind), and that concept is scarier than a clown costume any day.

Be an Impoverished Artist for the Night
Not a Morning Person? Your Body's Circadian Rhythms Could Ease Mars Colonization
New Study Says the Excessively Rich Aren't Any Happier. So Who Is?