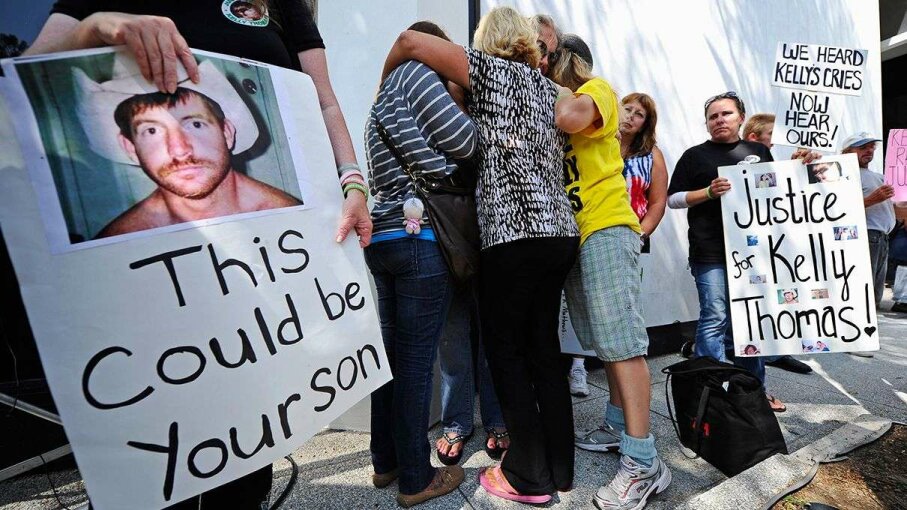 Demonstrators gather in California in 2011 after the death of a schizophrenic homeless man following an altercation with police officers. New research finds that exposure to violence is one risk factor in predicting likelihood of violence among adults ... Kevork Djansezian/Getty Images

Mass shootings are tragically common in the United States these days, and every time an act of mass violence draws national attention, the political conversation invariably turns to mental health. Conservative political commentator Ann Coulter summed up a common attitude about mental illness and violence in in her response to the Sandy Hook elementary school shooting in 2012: "Guns don't kill people — the mentally ill do." The president of the National Rifle Association has even called for a "national registry" of people with psychiatric diagnoses.

This study set out to identify the factors that contribute to people with mental illness diagnoses committing violent acts, defined as behavior ranging from pushing and hitting to sexual assault and assault with a deadly weapon. This research combined data from five previous studies looking violence and victimization in 4,484 adults with a variety of different mental illness diagnoses, including schizophrenia, bipolar disorder, depression, substance abuse disorder, and others. Follow-up data was available for 2,579 participants. After controlling for individual differences such as age, sex, primary diagnosis and more, the research team found three main risk factors that positively predicted violent behaviors in the study participants:

"Adults with mental illnesses experience victimization at much higher rates than people without mental illnesses," says Sarah Desmarais, an associate professor of psychology at North Carolina State University and co-author of the paper. "The fact that we found recent victimization to be a risk factor for future violence suggests that strategies designed to reduce victimization in this vulnerable population would also benefit public safety."

The research team found these three factors could predict violent acts within six months in study participants, regardless of age, sex, race, or what their specific diagnosis was. It's long been known that witnessing or experiencing violence can have an impact on people. And substance abuse — most notably alcohol use — seemed to increase the risk of violent crime by as much as sevenfold, even in people with no prior history of mental illness.

"The risk factors we identified, such as alcohol use, are clinically relevant," continues Desmarais. "We have evidence-based treatments that we can use to target these issues. I think these [these findings] are important because there seems to be a reluctance to view adults with mental illnesses as needing or deserving of public assistance, but these findings suggest that such public funding of mental health treatment will benefit everyone."

Now That's Unsettling
Mass shootings are not new in the United States, but between the 1930's and 1960's, it was more common for an active shooter to kill his family or bystanders during the attempt of another crime. Since then, and most notably since 2000, mass shootings most commonly happen in public places, against unknown bystanders.