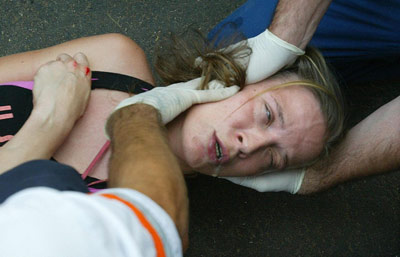 There are many more types of generalized seizures. These seizures include:

You may have heard the phrases "grand mal" and "petit mal" used to describe a seizure. These terms are considered outdated and inaccurate, so you shouldn't hear a doctor using them. Tonic-clonic seizure is the more appropriate term for a grand mal seizure, while absence seizures describe the seizures formally known as petit mal.

Most seizures are generally brief, lasting either just a few seconds or at most a few minutes. The period after a seizure is known as the postictal state; it may include a headache, soreness, confusion and fatigue. If a seizure lasts longer than five minutes, the person is entering a state known as status epilectus and requires medical attention.

Not all seizures, however, require immediate medical attention. If someone near you has a seizure, you shouldn't leave them to call 911. The most important thing to do is remain calm and take actions that will prevent the person from harming himself or herself. Roll the person on his or her side to prevent choking, but don't try to put anything in the mouth, like a spoon. Many onlookers try to do this, thinking it will prevent a seizure sufferer from swallowing his or her own tongue, but this won't happen. Cushioning the person's head, loosening tight clothing and removing nearby objects are all actions that will prevent the person from causing personal injury or harm, but if the person wants to wander around, allow him or her to do so. Stay with the person until the seizure ends and be patient as he or she recovers from the seizure. Then you can make the determination of who to call. It may be 911 if the person is pregnant, the seizure lasts for more than five minutes or the person becomes injured during the seizure.

So how do these individual seizures relate to a diagnosis of epilepsy? Turn the page to find out.